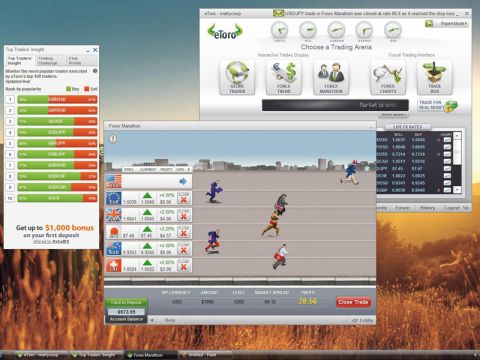 An interesting way to play the money markets from your home PC. With a bit of research and some patience you could make a bit of extra cash

Given the tattered state of our banks and the tarnished reputation of our bankers, you'd be forgiven for thinking that there couldn't be a worse time to launch a web service aimed at bringing currency trading to the masses. But that's just what eToro is – a trading platform designed to let the average punter play too.

Currency trading is, of course, nothing new. What makes eToro unique is how, to use the well worn internet cliché, it attempts to democratise the business of currency trading.

Traditionally the foreign exchange markets have been a closed shop, the sovereign territory of old-boy bankers with pots of cash and an understanding of how the markets work. eToro, on the other hand, is open to anybody with a credit card or a PayPal account.

Online you'll find thousands of people pushing pennies or virtual stacks of cash around the markets, many of them more than willing to help each other along. You can also practice making money out of less money using the site's training mode, which uses virtual cash.

The site also prides itself on having an interface which makes the undeniably complex business of trading currencies appear child's play.

The second-by-second change in the dollar against the yen can, for example, be shown as a sprint race between cartoon characters. Those old boy bankers would likely see the same thing as a sea of blinking figures and spidery graphs.

In use the site does indeed make the business of buying this, selling that and keeping an eye on the price of the other appear deceptively easy.

By comparison, some online share dealing services we've used couldn't make the business more frightening and Delphic if they'd purposefully tried to put you off the whole thing.

If you're interested in currency trading, eToro is certainly a cracking tool. Don't be fooled, though: it really is a frighteningly complex business and, as they say on all online trading forums, DYOR – Do Your Own Research.

Follow this maxim and at worst you'll learn lots about the business and enjoy yourself while doing so.