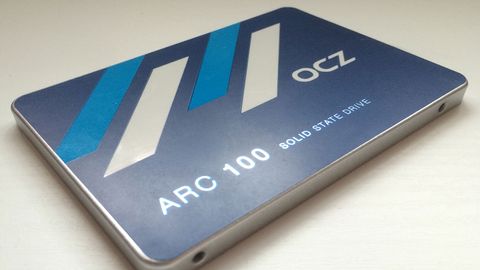 While the ARC 100 isn't the best performing drive money can buy, it's one of the most affordable. In real-world use, such as application loading times and system boot times, you'll only find slim differences between this drive and one that costs a lot more. At this price it's probably worth investing in the larger 240GB or 480GB models, as, sooner or later, you'll find a good use for the additional space.

OCZ is a company whose history of flash storage products began a few years ago with the Vertex range of SSDs that were renowned for being affordable but not the best performers or most reliable. After a tumultuous last few years, the business is now in the capable hands of Toshiba, and is trying to carve itself a new place in the SSD with the ARC 100, one of the most affordable 2.5-inch solid-state drives you can find.

Arriving in 120GB, 240GB and 480GB flavours, the ARC 100 is aiming at the same cost-conscious crowd that has so far responded so favourably to Crucial's similarly affordable MX100 SSD and Samsung's 840 Evo.

OCZ delivered a 240GB model to the TechRadar Pro labs, which has a street price starting at £83 (around $100, or AU$115). Quoted sequential read and write speeds of 490MB/s and 450MB/s indicate the ARC 100 isn't trying to compete with the best performing drives, but its spec sheet looks more than adequate including perfectly respectable endurance and IOPS figures.

The most striking external aspect of the ARC 100 is its brand new blue chassis, a striking shade which doesn't fail to catch the eye. Although it isn't said in as many words, this new choice of colour is as much about a reboot and refocus of OCZ, complimenting this new line of SSDs, as it is looking good.

Powered by a custom Barefoot 3 M10 controller, the Arc 100 houses eight "Advanced" 19nm Toshiba 2-bit MLC NAND chips on each side of the PCB, for a total of 16, equating to 128Gbit per chip. It's to be assumed the lower 120GB capacity drive only uses eight chips, while the 480GB model uses a higher density.

The drive is just 6.7mm high, so will be a standard fit in modern laptops of all shapes and sizes. There's no mounting bracket included for desktop systems, or any bundled software, although it works just fine with the OCZ Toolbox SSD management software which can be downloaded from their site.

Next Page Performance and Benchmarks