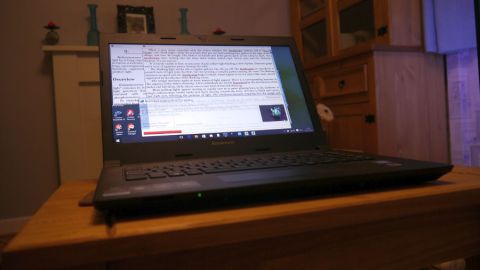 The Lenovo B40-30 will be a decent laptop if you can upgrade the memory by yourself. Otherwise, there are better alternatives out there for a tad more.

As surprising as it sounds, Lenovo sells two products that carry the B40 name. One is an all-in-one PC and the other a business laptop, and we are reviewing the latter here.

Its bigger brother, the B50-30, was put to the test by techradar more than a year ago and both share some common DNA, as expected. Both belong to Lenovo's B-Series, a line of affordable laptops that target the booming small business segment.

There are three big differences between these two Lenovo laptops though, and the first is the form factor. The B40 (MCG27UK) has a 14-inch display compared to a 15.3-inch for its bigger brother. That translates into slightly better portability (0.17Kg lighter) and a marginally smaller frame (40mm narrower).

Then there's the fact that this laptop doesn't come with an optical drive by default, the opposite of the rest of the range. We believe this is more of a cost cutting exercise since there is still an empty bay where the drive ought to be and Lenovo does provide an option to add one.

The third difference and probably a deal breaker for some of its targeted customers is the fact that it doesn't have a numeric keypad because of the form factor. Ouch.

That's a shame. The laptop looks anything but basic or entry level; true, it is plastic but it's matte and sturdy. This thing doesn't flex and the slightly reflective exterior adorned by the (old) Lenovo logo shouts "I mean business" to us.

The keyboard is ordinary: six rows, non-dedicated function keys (boo!) but a dedicated menu button. The keys, with Lenovo's signature curved base, feel slightly soft (and quiet) and have a decent travel. Nothing to write home about (or indeed type home about).

As for the trackpad, it's a tad bigger than a credit card with two physical buttons located at the bottom of it. They've got surprisingly shallow travel and you need to press them bang in the middle to get adequate feedback (i.e. hear a perceptible click).

Next Page Spec and performance