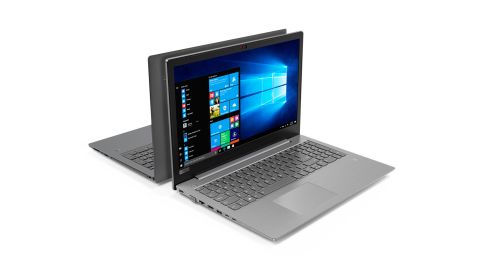 The Lenovo V330 looks very attractive on paper and less wonderful close-up. With some minor tweaks, this could be a great machine, as the underpinning technology inside is first class.

The Lenovo V Series are laptops for those who want the latest technology, but can’t stretch to an Ultrabook or 2-in-1 equivalent design. The low cost and high spec approach has been highly popular before, can it be so again?

Today, we’ll be taking a look at the Lenovo V330; a Core i5 powered laptop that could be ideal for a student or business applications.

The review model is currently priced at £539.99 ($721) and comes with a powerful and latest technology CPU, but a conventional hard drive.

The V series (or Value Series) is available in most regions, but not all. And, the exact mix of models and specs also varies regionally.

In the US the design is branded as the Lenovo Ideapad 330, with no V Series mentioned.

The machines it will be competing with include the HP ProBook 450 G5 Laptop, Acer Swift 3, Acer Aspire 5, Asus VivoBook S15 and from the same stable the Lenovo ThinkPad E580, to mention just a few.

From the outside, the Lenovo V330 looks rather swish, finished in an ‘Iron Gray’ high gloss plastic with a brushed metal skinned lid.  It also comes in a lighter ‘Mineral Gray’ if the other shade is too dark.

The 15-inch screen form factor allows plenty of space for the keyboard, touchpad and side placed ports, avoiding the cramped nature of smaller devices.

At 2.05kg (4.5lbs) it isn’t the lightest machine to carry around, but it isn’t anything that you would have difficulty balancing on your lap or using on a train.

However, as it includes an optical drive that ejects from the right side, where a right-handed person would normally place their mouse, you might still run into space issues.

Cheaper machines aren’t usually blessed are in the ports available department, but the V330 has an excellent selection.

The usual culprits are there: HDMI, VGA, two USB 3.0 ports, RJ-45 Ethernet, an SD Card slot and audio combo jack. And, not expected but great to see, are two USB Type-C ports.

One of these is a Thunderbolt port, with both DisplayPort and PowerDelivery capable that should work well with a suitable Thunderbolt docking station.

Opening the lid reveals a keyboard with both decent sized keys and a good spacing between them. The membrane key action is a little light for our sausage-like digits, but a reasonable speed of entry is easily within grasp.

Below the keyboard on the left side is a fingerprint reader that wasn’t on par with the same technology on most phones, but it’s an option.

Here is the Lenovo V330 configuration sent to TechRadar Pro for review:

What is likely to cause more problems is the touchpad, a design that has no visible buttons.

You can gesture left or right mouse clicks, but the front edge has switches under it that perform the same function if you press hard enough.

As we’ll mention later, this was one of the things we didn’t care for, as it didn’t seem very resilient.

One head-scratcher is that the hinge connecting the display allows the screen to fold entirely flat. As this isn’t a touch panel display, and it is virtually impossible to use it when in that position, why do this?

Budget machines often use previous generation silicon as a means to reduce their production costs, but the V330 uses the very latest Intel parts still warm from the foundry.

To offset those parts, Lenovo took an axe to some of the other components, making for an oddly unbalanced design. With an amazing 8th Gen Core i5 processor at one side of the spectrum, and a 5400 RPM hard drive at the other.