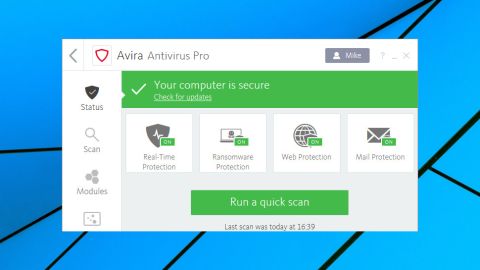 This represents decent value as an antivirus and VPN bundle, but doesn't have the full protective power of the top security suites. Avira Prime is worth a look anyway if you need its specific features, like the excellent clean-up tool.

German security vendor Avira has a huge range of antivirus and privacy products, and many of these have free options. Some of these are very capable, especially Avira's free antivirus, but they have various limits and restrictions, too.

Avira Prime, the company's ultimate security suite, gives you full access to all its products across multiple devices and platforms, for a fraction of the price you'd pay if you bought them individually.

Avira's Mac, iOS and Android clients don't have quite as much power – with no antivirus on your iPad, for instance – but still provide multiple layers of protection.

That's a 60% saving on the regular price, so even if you're not interested in all of its features, Prime looks like a good deal. For example, Avira Antivirus Pro and Avira Phantom VPN together would normally cost from $17.99 a month to cover five devices. Opting for Prime saves you a stack of cash on these tools alone, and you're getting everything else for free.

If security is your top priority, there could be better deals elsewhere. Bitdefender Total Security 2020 has many more security features than Prime – firewall, spam filter, parental controls and so on – but can protect up to five devices for $4.16 a month in year one, $7.49 on renewal.

Avira Prime has an unlimited VPN, though, while Bitdefender Total Security 2020 restricts you to just 200MB data a day. Adding Bitdefender's full VPN lifts the total price to $7.49 a month in year one, $10.82 on renewal.

On balance, then, Avira Prime seems to be a must-see if you're an Avira fan, or you're looking for both a new antivirus and a VPN, or you can use its many maintenance tools (the system clean-up module, say). There's no trial, but a 30-day money-back guarantee limits your risk, and if you sign up for monthly billing, you can cancel at any time.

Avira Prime is stuffed with features and functionality, but that doesn't seem to complicate its installation. The setup tool is compact, and it downloaded and installed the full package quickly and with minimal hassle.

If you've ever used another Avira product, you'll already be familiar with the interface basics. The Windows edition adds an Avira icon to your system tray, for instance, and double-clicking that displays Avira's launcher. Avira Antivirus, Software Pro, Phantom VPN and System Pro were all available on our test PC, and you're able to install the Password Manager, Safe Search, Home Guard and other tools with a click.

The launcher has an unusual but welcome bonus: its buttons don't just run specific Prime modules – they also tell you something about their current state.

Right now, for instance, our Antivirus Pro button tells us when it last ran a scan, the Phantom VPN Pro button tells us we're currently connected, and the Software Updater Pro button says it's installed some patches and we need to reboot. It's a simple idea, but very useful, and far more convenient than having to launch and check each module individually.

If you're the hands-off type, though, you don't have to view the launcher at all, at least from a security point of view. Avira's default settings are well chosen, and once installed it'll immediately go to work, protecting you from malware and other threats.

Avira Antivirus Pro makes it easy to run on-demand scans. Fire up the launcher, tap Quick Scan and watch. Performance is reasonable, and we had a verdict in around a minute.

Baseline scanning speeds are comparable with other suites. For example, both Avira Antivirus Pro and Bitdefender 2020 took around 23 minutes to run an initial scan of our test 50GB data.

Avira took the same length of time on our second and third scans, though. Bitdefender only checks new and changed files, and its scan time fell to 80 seconds by the third run.

Avira scores well for usability. Scans don't usually slow your system down, but you can easily pause them if they do, or abort a scan entirely. And there's full support for simultaneous scans. If you're running a full system check, and need to scan your downloads folder while it's running, and maybe another file as well, Avira won't care. Every scan gets its own scanning and results window.

There's built-in protection for scanning incoming and outgoing emails. This all happens at the network level, so Avira doesn't need to install an Outlook or other email client add-on, but it is unusually configurable. You can tell the engine which ports to scan, how emails will be checked, what to do if there's a problem, or whitelist some email addresses to ensure they won't be scanned.

Unlike Bitdefender's email filter, this won't block pure spam; it's more about detecting malicious attachments and anything with dangerous links. But it's useful, and gives you another welcome layer of protection.

We don't have the space to begin to cover all Avira Prime's features, but let's quickly look through the highlights.

Avira Phantom VPN is probably Prime's most valuable module, after Antivirus Pro. It's a simple VPN which offers servers in 36 countries around the world, and has easy-to-use apps for Windows, Mac, Android and iOS.

Performance was mixed for us, with our local UK server hitting a disappointing 30Mbps on a 75Mbps connection, but more distant servers did better.

Website unblocking results were mixed. Phantom VPN couldn't get us into BBC iPlayer, but its dedicated US Streaming location gave us access to US Netflix and Amazon Prime.

Phantom wouldn't be our choice of VPN, then, but it's perfectly adequate for basic tasks, encrypting and protecting your internet connection when you're out and about online.

Avira Password Manager enables creating and using secure passwords from its Chrome, Firefox and Opera extensions, and Android and iOS apps, then syncs them across your devices. The Pro build also warns you of insecure passwords and alerts you if your data has been stolen in a security breach.

The package works at a basic level, but it's strictly passwords-only, with no ability to complete forms, for instance, or store and insert credit card details. It can't compete with a market leader like Dashlane.

The free edition alerts you to updates but leaves you to handle them yourself. The Pro version can automatically download and install them in the background, even warning you afterwards to reboot, if necessary. Whether you want to do that is open to question, and we think it's always safest to use the official software updater. But if you're happy to use this kind of tool, Software Updater Pro seems to work well.

Some of these technologies are dubious ('fixing' Registry 'errors' is a historically questionable pursuit), others are strictly expert-only (tweaking write cache buffer settings), but there's power here, too. The clean-up tool found more junk than CCleaner, for instance. And the Game Accelerator automatically found and added our Steam games, allowing us to use it without doing any work at all.

Avira's antivirus engine has always done a good job of detecting our own malware samples, but to really understand its abilities, we check Avira's performance at the big independent testing labs.

The most recent Feb-May 2019 Summary report sees Avira reach an impressive second place. Kaspersky came first, but by the narrowest of margins: both packages managed a 100% protection rate, but while Kaspersky raised no false positives, Avira had one.

There was more good news in AV-Comparatives' 2019 Android test, where Avira was one of 23 apps (out of 250) to detect 100% of test threats and not raise a single false positive.

AV-Test's June Windows 10 test results weren't as positive, with Avira rating 5.5/6 for both protection and performance. That's around the industry average, but it left Avira trailing behind nine big-name competitors (Avast, AVG, Bitdefender, Kaspersky and more).

That's not great, but it's also far from typical. Checking Avira's long-term ratings at AV-Test showed the company scoring full marks for protection in the seven previous tests. This result could be the start of long-term issues, but it could just as easily be a one-off blip, so we're not going to place any weight on it just yet.

As a final check, we normally match antivirus engines against our own ransomware simulator. As it's custom developed by ourselves, this should ensure the engine can't detect the threat by file signature, making it a useful test of behavior monitoring.

Avira Antivirus wasn't fooled, though, and detected and blocked the simulator before it was able to launch. That's bad news from our point of view, as we didn't get to see how the engine would handle a threat it didn't immediately recognize, but it's great news for Avira: our simulator was eliminated before it could touch a single file.

Avira Prime is stuffed with features, but some are underpowered (VPN, password manager), others aren't really security-related (clean-up tool), and it leaves out some key features you'll get elsewhere: firewall, antispam, parental controls. That said, it is worth a look for Avira fans or if you need its specific features, but there are more capable security suites around.