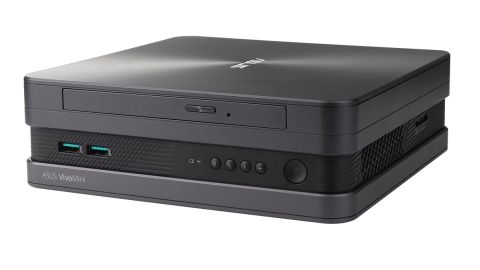 The VC68V aptly demonstrates the performance kick that Intel’s Kaby Lake chips delivered, with this easily being one of the fastest mini-computer systems we’ve ever tested. And it’s sobering to consider that this wasn’t the Core i7-5700 model.

Here’s how the Asus VivoMini VC68V performed in our suite of benchmark tests:

Some of these high scores should also be attributed to the M.2 NVMe drive, achieving more than 3GB/s read speeds and nearly 1,200 MB/s writes. That would be fantastic for many tasks, were it a little larger.

The maximum size of these M.2 drives is 512GB, limiting their usefulness in some respects, although you could put dual 4TB SATA SSDs in here easily, and stripe those with RAID 0.

The only aspect of this machine that truly lets the side down is the integrated Intel GPU (Intel HD Graphics 630). As each benchmark relating to graphics was completed, our longing grew for Asus to have put something with a bit more pep in here from AMD or Nvidia.

Without an option for discrete graphics, this machine’s potential as a video editing platform was undermined from the outset, when everything else about this unit seems perfectly aligned with that application.

Asus makes a great deal of the fact that this unit can drive three 4K displays at once, which technically it can. However, it can’t decode three 4K 60 fps streams simultaneous to each of those panels, because the Intel GPU wasn’t built to handle that level of workload.

In our tests, it struggled to keep the audio in sync on a single UHD demo file, never mind three at that quality level.

The integrated GPU isn’t a 3D gaming platform either, as you could probably guess, with low resolution and settings being the necessary experience with most games, predictably.

This machine is incredibly powerful. So much so that it makes many desktop systems seem feeble and unresponsive, and yet Asus is promoting it to use Skype!

Surely the company is kidding at this price?

Accepting that the business world can on occasion be irrationally niche, that doesn’t fully explain why this is such an amazingly engineered and specified computer supposedly relegated to doing something any cheap Chromebook can do.

We can easily think of a dozen great uses for this computer, and none of them involves demeaning it with Skype.