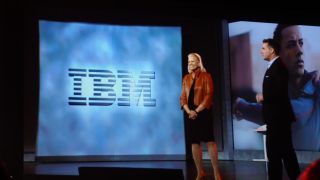 Part of the message that's being driven by Intel's anchoring CES 2016 keynote is the use of technology to improve the human condition. Last night, Intel CEO Brian Krzanich showed us how its sensors and computing processors can be used to train athletes, providing a digital coach that knows when and how to motivate you in your practice.

After we connect things to the internet with the Internet of Things (IoT), IBM, like Intel, wants to collect, analyze and use data to create intelligent machines that help us.

The brains of Pepper

IBM's Watson will provide the cognitive intelligence to power Softbank's Pepper robot. Rometty announced a partnership with Softbank that would place Watson inside Pepper to help it better understand the world around it.

"IBM and SBRH will tap into data and knowledge across the 'Internet of Things' to enable Watson-powered Pepper to make sense of the hidden meaning in data that traditional computers cannot comprehend – including social media, video, images and text," the companies said in a joint statement.

As part of the goal in making Pepper smarter is helping it learn. Watson will help Pepper understand human language and interactions, a move that could turn Pepper into a robotic digital assistant.

Similarly, Intel showed off its vision of an autonomous butler during its keynote yesterday, but Intel relied on its own technologies to showcase intelligence, like the RealSense 3D camera to help the robot navigate and avoid obstacles in the physical world, sensing capabilities with Intel Curie IoT processors and brain power through Intel's Core m7 processors.

Unlike robots on a manufacturing line, the Watson-powered Pepper and Intel's prototype will need to understand and process more complicated interactions. IBM envisions that Pepper could be used at kiosks and in retail settings.

Moving from Pepper's enterprise home to your home, Rometty announced a partnership with Medtronics and Under Armour.

It costs society $600 billion to keep people affected by diabetes alive, and Watson can help reduce this cost and improve the lives of diabetics.

Through the use of wearables, Medtronics and IBM hopes that it can analyze data and come get ahead of the disease. A patient would wear a wearable that tracks insulin and glucose levels, and that information is sent to a connected iOS or Android app.

Where Watson comes in is with preventative steps to help the patient manage diabetes.

Under Armour is teaming up with IBM to create a fitness coach. A patient's food intake, activity, sleep, heart rate and calories burned will be tracked in UA's Record app, and Watson will collect that data along with nutrition management and local weather condition to analyze a user's training.

Even appliance manufacturer Whirlpool is tapping Watson's cognitive intelligence for its connected home products. Whirlpool wants to analyze consumer usage of appliances in order to develop new features in the future.

IBM's keynote shows that the Internet of Things isn't about connecting every "dumb" thing to the internet to make it "smart," but it's about data. More specifically, it's about collecting the data, analyzing the data and making sense of trends to drive future innovation. It's this cognitive intelligence, delivered by Watson, that could fuel the next wave of the Internet of Things. The first step, getting connected, was the easy part.