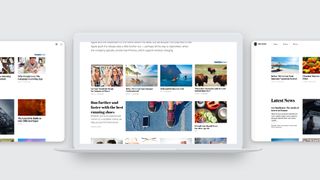 Online advertising rivals Taboola and Outbrain have announced that they will form a single company to take on the likes of Facebook and Google.

Both companies provide advertising-based content recommendation engines for publishers that typically appear as boxes at the bottom of online articles which feature a mix of stories from the publications themselves, ads and sponsored content from other sites.

Taboola and Outbrain describe their deal as a merger though the combined entity will be called Taboola and Taboola's current CEO, Adam Singolda will lead the new company.

Taboola will pay Outbrain investors $250m in cash alongside a 30 percent share of the combined companies. All in all, the merger will create a company valued at $2bn which means the transaction value of this deal is $850m.

The combined company's customer list now includes 20,000 online properties with an audience of 2.6bn and Taboola and Outbrain believe that together they can go up against the biggest names in online advertising.

Founder and CEO of Taboola, Adam Singolda shared his thoughts on the merger in a press release, saying:

“Over the past decade, I’ve admired Outbrain and the innovation that Yaron Galai, Ori Lahav and the rest of the Outbrain team have brought to the marketplace. By joining forces, we’ll be able to create a more robust competitor to Facebook and Google, giving advertisers a more meaningful choice. We’re passionate about driving growth for our customers and supporting the open web, which we consider critical in a world where walled gardens are strong, and perhaps too strong. Working together, we will continue investing to better connect advertising dollars with local and national news organizations, strengthening journalism over the next decade. This is why we’re merging; this is our mission.”