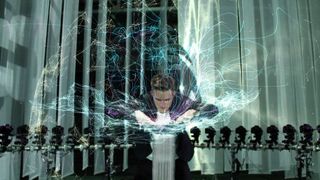 A visual representation of what it's like to use IE10 on Windows 7, presumably

The long-promised Internet Explorer 10 is finally available for Windows 7 users as Microsoft suddenly remembers that there are a few of you out there.

You'll need Service Pack 1 installed, but if you're running Windows 7 and haven't blocked the upgrade, it should install automatically through Windows Update - those of you with the IE10 Release Preview installed will get the update today.

IE 10 on Windows 7 has many, but not all of the features of IE 10 on Windows 8. You only get the desktop version of the browser, not the full-screen Windows 8 version, and Flash is still a separate plugin that you have to update yourself.

You do get the same much-improved support for web standards, built-in spell check and autocorrect, faster tab closing - and the stalled privacy protecting Do Not Track setting is enabled by default.

Microsoft says IE 10 is up to 20 per cent faster than IE9 on the same system, which you can test for yourself in the new HTML5 version of Minesweeper on the IE Test Drive site.

When we asked about the delay between shipping Windows 8 and IE 10 last year and delivering it for Windows 7 this week, a Microsoft spokesperson put the emphasis on quality (rather than how much of the IE team is busy building IE 11 for Windows 9, say).