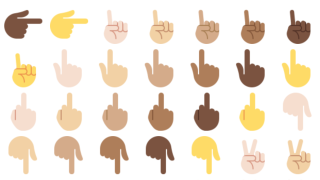 Twitter has finally joined Apple's iOS and Android by adding support for Unicode 8.0, which brings with it diversity, tacos and the middle finger emoji.

Twitter quietly added support for the new emojis today, with Emojipedia tweeting the new "Twemoji" additions that can now be used in tweets even if your device doesn't support Unicode 8.0 yet.

The new emojis include racially diverse emojis, as well as tacos, the hyped-up middle finger, family emojis and 256 country flags. You can find the full list of Twemojis here.

2015 has proven to be the year of the emoji, with the word 'emoji' even being named Oxford Dictionaries Word of the Year.

The open source Unicode 8.0 came onto the scene earlier this year, with iOS 9.1 adding the new emojis in October.

Google also added support for the new emojis just two days ago, though only Nexus handsets have access to them right now.

And with Twitter recently introducing special Star Wars emojis, it's really no surprise to see the social media giant finally add support for these new emojis too.