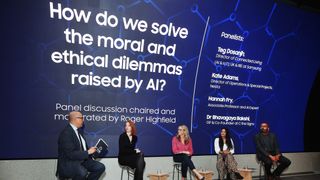 Although artificial intelligence (AI) has already made its way into our daily lives, one of the biggest problems with this emerging technology is that few people really understand how it works or how it could affect their future. To help businesses and consumers alike better understand AI, Samsung has launched a new initiative called FAIR Future with the aim of involving everyone in AI by making it easier to understand.

TechRadar Pro spoke with Samsung’s director of connected living (AI & IoT) for the UK and Ireland, Teg Dosanjh who provided further insight on the firm’s new report and explained how businesses can take an ethical approach to implementing AI.

What were some of the most interesting findings from your recent FAIR Future report?

First, we found people aren’t quite as concerned about AI overlords as we expected. In fact, around half of people believe that AI will be a force for good in society, and just a fifth believe it is dangerous.

This is pretty encouraging given AI is often portrayed in fiction and in the media through a negative lens – whether it’s killer robots in Terminator or AI rebelling against its creators in Westworld.

It was also interesting, and concerning, to see that people feel they’ll have very little influence over AI in future. Over a third (36%) of people believe they or their family will have no influence over how AI develops in future. This is even higher amongst teenagers (58%), who will arguably be most impacted by this technology in future.

People said they’re worried about AI being biased, about the ethics it’ll be programmed with, and even that it could come into conflict with humans.

Almost four in ten people feel that AI will hold some form of bias, potentially passed on from those who are programming the AI, either intentionally or as a result of their own unconscious biases, existing information or assumptions.

People believe this bias might encourage people to act on their existing prejudices (35%) and that groups that already face discrimination in society based on their race, gender, sexuality or beliefs, will face even more of this as a result (31%).

Over two-thirds (70%) are also concerned that there could be future conflict between AI and humans, with 27% of young people seeing this as a significant issue. This means while many currently think AI is a force for good, they are not as optimistic about the future.

What are some ways that consumers are experiencing AI today that they might not be aware of?

AI isn’t a new idea. We’ve been creating computers, phones, tablets and systems that can apply human-like logic for decades.

Many may not realise that AI is already helping us in everyday activities such as planning the best route to work, or suggesting selections on what we may be interested in or enjoy from our news sources and streaming services.

How can businesses help dispel the idea of a future conflict between AI technology and humans?

Over the past few years, we believe the tech industry as a whole has not done a good enough job at making AI understandable.

AI can feel intimidating. It feels complicated. Almost 90% (87%) of people believe that AI needs to be easier to understand and they’re looking to technology companies to simplify things.

The more familiar people are with the technologies involved, and the possibilities of AI, the more positive they are about the future.

That’s why at Samsung we’re starting a debate around AI ethics by leading the nation’s biggest ever conversation around AI. We want to listen, learn and involve real people in the future direction of this technology.

What are some of the ethical dilemmas that AI will have to face and how can businesses ensure that their AI systems make the right decision?

The challenge with ethical dilemmas such as the ‘Trolley Problem’ is that they drive significant discussion amongst humans without reaching a consensus, let alone reaching a conclusion on what the AI should do in these scenarios.

All of this highlights the growing debate about how humans and AI should interact with each other. When you consider that those who create neural networks are often unsure about how they work, how do we ensure the human stays central and in control? The critical element is to be clear on how we decide on the balance of an AI taking the lead vs. complimenting a human decision or interaction.

For example, are we as a society comfortable with literally handing over the keys for our cars of the future to AI so that it’s in the ‘driving seat’, or do we see it as the ever vigilant and supportive passenger, helping us stay alert and focused on the road ahead when we’re driving.

Businesses need to make sure they bring a range of voices into the AI conversation, so that the way AI is programmed and utilised is ultimately reflective of the whole of society.

What are some of the most exciting advancements in AI can we expect to see in the next five years?

When we asked people what they were most looking forward to in AI, they hoped it would bring us enhanced healthcare (63%) and giving the elderly or those with disabilities more autonomy in their lives (56%). This is where I think we’ll see the most change in the next five years, such as AI helping doctors diagnose illnesses or analysing medical scans. The opportunity for AI to truly democratise healthcare is significant and we will see the majority of opportunity focus in this space.

In addition, we’ll see an increase in the utilisation of neural networks by more companies to process complex data and recommend outcomes or observations. This is likely to lead to an increase in the AI ‘big data’ industry and a standardisation of approach, skillsets, roles and of course legislation.

How will Samsung’s Fair Future initiative help involve everyone in the development of AI?

First, we’ve listened to people’s opinions by conducting a huge survey of people across the UK and Ireland. Through this people, especially teenagers, have told us they want to learn more about AI, which is why we’re taking our FAIR Future campaign into communities across the UK to allow everyone to learn more about this transformational technology and share their views on how AI should be developed.

Our online hub will open up this knowledge to everyone in society so they can better understand what AI is, how AI is already part of their lives, and explore how it might evolve in the future.

By giving people a voice in the AI debate, we hope to stimulate awareness, understanding and promote individual control of AI in people’s lives.