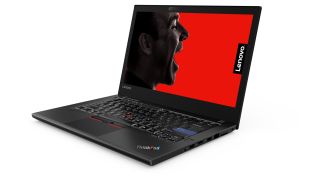 At an exclusive event at the Yamato Labs in Yokohama, Japan, which TechRadar attended, Lenovo marked the 25th anniversary of the announcement of the original ThinkPad 700C by revealing the ThinkPad Anniversary Edition 25, a retro-themed limited edition ThinkPad that takes a number of design cues from the original.

Not many brands in the computing world could play on its legacy in this way (in a similar fashion to how Nintendo released the NES Mini and SNES Mini retro consoles), and Lenovo is clearly relishing this chance.

While the outside of the ThinkPad Anniversary Edition 25 has a decidedly old school feel about it, on the inside this is a thoroughly modern device, coming with an Intel Core i7-7500U processor and Nvidia GeForce 940MX graphics card.

The ThinkPad 700C was designed by Richard Sapper, based on traditional Japanese bento boxes, and was engineered in the Yamoto Labs in Japan.

Since then, there have been 130 million sales of ThinkPad devices, with Lenovo acquiring the division and brand from IBM in 2005. Most ThinkPad devices retain design elements of previous models, such as the black chassis and red TrackPoint pointer.

Keep an eye out for further features about our time with Lenovo for the 25th anniversary of the ThinkPad, including exclusive interviews about the past, and future, of ThinkPad with some of the people behind the iconic machine.