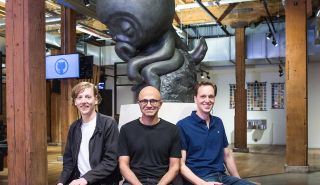 It has just been announced that Microsoft has acquired GitHub for $7.5 billion in Microsoft stock. The news comes after days of speculation about the deal.

This is big news as GitHub hosts the world’s largest collection of code, with many developers using it as a repository for projects.

As of March 2018, GitHub claimed there were 28 million developers in its community, and 85 million code repositories, and with Microsoft’s renewed focus on software and services, many people expected this move.

In a blog post Satya Nadella, the CEO of Microsoft, explains the rationale behind acquiring GitHub: “From the largest corporations to the smallest startups, GitHub is the destination for developers to learn, share and work together to create software,” while revealing that Microsoft was the most active organisation on GitHub, making more than 2 million commits to projects.

Also, Nadella stated that “Microsoft is all-in on open source”. That may not completely win over open source developers who don't like the idea of a company like Microsoft owning GitHub, but as Nadella says, “When it comes to our commitment to open source, judge us by the actions we have taken in the recent past, our actions today, and in the future.”

We're thrilled to announce that we've entered into an acquisition agreement with @Microsoft! https://t.co/4DezuXTJfV pic.twitter.com/LUZxjXFVVwJune 4, 2018

Once the acquisition is complete, Nat Friedman, an open source veteran and founder of Xamarin, will become CEO of GitHub.

Meanwhile, GitHub CEO and co-founder Chris Wanstrath will be a technical fellow at Microsoft.