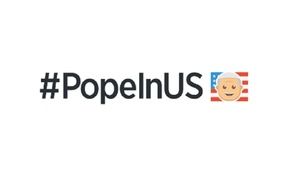 Pope Francis has arrived in the US for a historic five-day, three-city visit. Among the pontiff's travel plans: meeting with President Obama and appearing before a joint session of Congress, then jetting off to New York City and Philadelphia.

This is Pope Francis' first trip to the US, and to mark the occasion Twitter is rolling out a number of special emoji to help users talk about the visit.

Like the special emoji it rolled out for the World Cup, you'll need to use a hashtag in a published tweet for the emoji to appear. The Pope emoji (popeji?) pop up alongside the hashtags: #PopeInUS, #PopeInDC, #PopeInNYC and #PopeInPhilly.

#PopeInUS is the most distinct, showing a beaming Pope face against an American flag background. The DC tag is a picture of the US Capitol building, NYC shows the Statue of Liberty and Philly pulls up a cracked Liberty Bell.

Update: As spotted by Mashable, Snapchat also has a special local filter that features Pope Francis driving a Popemobile along with "They see me rolling" and the city where he is, in fact, rolling.