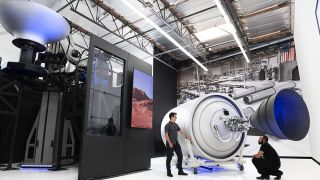 Relativity Space is an LA-based startup which is another in a growing list of firms to truly innovate with large-scale 3D printing, although in this case, it’s not a boat which is being printed as we recently saw – but a rocket.

Indeed, Relativity has just received $140 million worth of Series C funding towards its overarching aim of being the first company to launch an (almost) entirely 3D printed rocket into orbit.

Other outfits, like SpaceX, may 3D print certain parts, but not the whole rocket – or rather 95% of it, with the exceptions being some electronics, cables and rubber gaskets – with that process achieved by giant 3D metal printers called Stargate.

These are the largest such devices in the world, the company claims, and as Wired reports, the first version of Stargate is 15 feet tall and has three robotic arms used to weld metal (supplied by miles of thin custom-produced aluminum alloy wire).

Stargate produces all the large parts needed for the rocket, with standard commercially available metal 3D printers used for the smaller bits and pieces which require more precision.

The first rocket the company is set to produce – Terran 1 – will have 100 times fewer parts than a comparably-sized standard rocket, with the aim being to manufacture it from raw material to launch-ready in under 60 days.

Terran 1 will have a payload capacity of up to 1,250kg and will be capable of launching mid-sized satellites. Commercial launches are expected to begin in 2021, and the firm already has contracts with the likes of Telesat and mu Space.

Looking further out, Relativity sees its rockets as playing a key part in much grander ventures such as transporting infrastructure to the surface of Mars.

Tim Ellis, co-founder and CEO, observed: “Relativity was founded with the long term vision of 3D printing the first rocket made on Mars and expanding the possibilities for human experience in our lifetime.”

As well as the gargantuan 3D printing hardware, the other really clever bit is that machine learning algorithms are employed so the printer recognizes mistakes, corrects its own work, and learns from these errors to get better in the future.

Ellis told Wired: “To print stuff on Mars you need a system that can adapt to very uncertain conditions. So we’re building an algorithm framework that we think will actually be transferable to printing on other planets.”