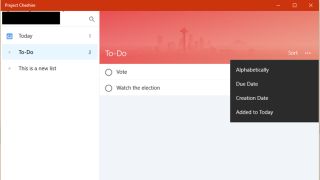 Microsoft is busy working away on its to-do list app codenamed Project Cheshire, with the software having moved on to beta testing.

Apparently the app is now in private beta – it’s available to download on the Windows Store, but only those signed up to the beta can use it – and according to Thurrott.com, there will soon be not only a universal Windows app, but also Android and iOS versions.

Project Cheshire is looking more polished than previous incarnations that were spotted, as you would hope, although it still looks fairly basic at this moment in time.

Microsoft is billing it as a “brand new and simple, yet incredibly focused, to-do app that helps you get stuff done”, and it boasts the usual tricks including letting you set reminders of things to do (obviously) and making suggestions of things you might need prodding to remember.

It certainly looks like the emphasis is on making this an easy-to-use piece of software, but clearly it isn’t finished yet.

It makes you Wunder

Aside from how it’s coming on, most of the chatter online regarding Cheshire is exactly how it’s going to fit in with Wunderlist, the to-do app Microsoft already owns, having acquired it back in the summer of last year.

It seems odd, then, to be developing another to-do affair, although one possibility that has been mentioned is that this project is an incoming successor to Wunderlist which will take all its best bits and integrate everything with Microsoft’s Office suite. As ever, time will tell.

Meanwhile, in terms of products which are imminent, last week saw Microsoft Teams unveiled, which is the company’s answer to Slack (with some fresh spins on the formula).