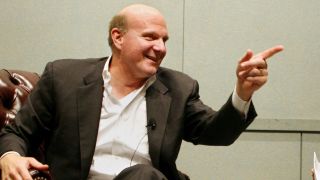 Ballmer told to retire before he damages Microsoft further

Steve Ballmer is the world's worst CEO, according to business bible Forbes.

The performance of the Microsoft boss, head of one of the world's most valuable and profitable companies, is derided in the article which, we must say, borders on the mean-spirited.

Forbes reckons Ballmer, who took over ten years ago has "singlehandedly steered Microsoft out of some of the fastest growing and most lucrative tech markets (mobile music, handsets and tablets.

"The reach of his bad leadership has extended far beyond Microsoft when it comes to destroying shareholder value – and jobs," the article continued, claiming he had also affected profits at companies like Dell, HP and Nokia.

The publication accuses Ballmer of failing to broaden Microsoft's horizons beyond the PC software sector, a mistake that could prove costly if mobile continues to encroach on the market.

"Microsoft is (a) PC company, nothing more" wrote Adam Hartung. As demand for PCs shifts to mobile. Years late to market, he has bet the company on Windows 8 – as well as the future of Dell, HP, Nokia and others.

"An insane bet for any CEO – and one that would have been avoided entirely had the Microsoft Board replaced Mr. Ballmer years ago with a CEO that understands the fast pace of technology shifts and would have kept Microsoft current with market trends.

The brutal roasting continues with an assertion that Ballmer should gracefully retire before coming between investors and their fortunes.

"Although he's #19 on Forbes list of billionaires, Mr. Ballmer should not be allowed to take such incredible risks with investor money and employee jobs. Best he be retired to enjoy his fortune rather than deprive investors and employees of building theirs."

While Hartung presents some interesting points regarding Microsoft's over-reliance on its PC software, the efforts being made with Windows Phone are not without merit, despite slow initial sales.

However, he also completely ignores the phenomenal success Microsoft has experienced in the gaming arena through the Xbox 360, under Ballmer's control.