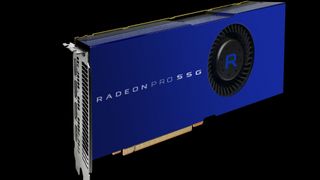 AMD has announced a new range of affordable Radeon Pro WX graphics solutions for workstations and professional use, along with a fresh graphics card – the Radeon Pro SSG – which runs with a whole new concept of incorporating a large SSD to power up its performance.

So let's start with the latter, as doubtless that's the one which has immediately grabbed your attention. Obviously a graphics card can only carry a relatively limited amount of memory, and when it comes to working with large datasets in the likes of science and engineering or heavy video/rendering work, the truth is that this memory isn't nearly enough.

So in these cases, rather than having to pull data over from the system memory (or drive) which slows things down considerably, the Radeon Pro SSG brings a 1TB SSD directly on-board the card to act as a frame buffer and allow big datasets to be loaded up and dealt with locally, for far better overall performance.

AMD notes that the Pro SSG will be ideal for all manner of demanding applications in scientific fields through to VR content creation and real-time post-production of 8K video.

The graphics card has already been demonstrated rendering a raw 8K video – the initial demo showed this running at 17 frames per second, and switching to the SSG, that was boosted to over 90 frames per second. An impressive sounding feat to say the least.

It's still relatively early days for the Radeon Pro SSG, although AMD is now accepting applications for developer kits, with full availability pencilled in for next year. Naturally enough, the dev kits won't be cheap and indeed run to $10,000 (around £7,600, AU$13,300) apiece.

Back down to Earth

These start with the Radeon Pro WX 4100, which is a half-height video card designed to fit small form factor workstations, and then there's the WX 5100 in the middle, with the top-end WX 7100 being the solution for more demanding graphics crunching and VR content creation – although the latter will still pitch up at a price under $1,000 (around £760, AU$1,330).

All of those Radeon Pro WX cards should arrive in the final quarter of 2016.