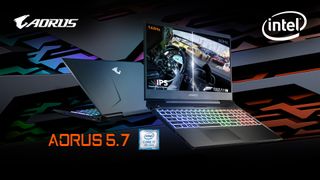 Gaming laptops have absolutely exploded in popularity over the last few years, and it’s easy to understand why. It’s been more than a decade since laptops overtook desktop computers in terms of overall sales numbers – so it’s undeniable that we all much-prefer the convenience of the portable PC form factor in general. Traditionally, choosing a gaming laptop has often meant making compromises, with their smaller chassis’ putting limitations on the types of components they could use. However, over the last few years, advances in laptop hardware have meant that you don’t need to sacrifice performance for the sake of portability – and in 2020, it’s entirely possible to have a gaming laptop that’s powerful enough to run any modern game smoothly, but also sleek enough to do double-duty as your everyday device.

A gaming laptop doesn’t have to cost an arm and a leg, either – and two affordable new models in particular, the AORUS 5 and AORUS 7, clearly demonstrate that you can get everything you need without blowing the budget. As the dedicated gaming brand of Taiwanese PC parts-maker Gigabyte, AORUS has been diligently creating impressive gaming notebooks for over half a decade – and the AORUS 5 and 7 are a great example of why the company’s products have become a favourite of gamers.

This pair of laptops combine the brand’s high-quality construction with carefully-selected components to offer affordable 15.6- and 17.3-inch options that still contain everything that laptop gamers on a budget need. These two sibling laptops share a lot of DNA – both aptly supply portability, power and performance and are pleasing to the eye – but they differ in one key spot: size. If you want something that’s a bit more compact and easy to transport, the 15.6-inch AORUS 5 is made for you. If you want to go all-in and take your big-screen gaming experience with you, the 17.3-inch AORUS 7 is what you need.

Both models share the same basic design blueprint, with aluminium chassis’ constructed with stealth-fighter jets in mind. The result is a sleekly chiselled exterior – stylish enough to draw admiring looks at a local LAN, but understated enough to fit into even the stuffiest office. The bezels are super-thin all the way round the display (despite integrating HD webcams at the top) and both carry a footprint that’s more-commonly associated with smaller models: the AORUS 5’s 35.9cm width is more akin to a 14-inch notebook, while the 39.9cm width of the AORUS 7 means it’s closer to a 15-inch notebook. At 2.15kg and 2.5kg respectively, both are also light enough to take with you all day.

Gaming prowess, right down to the bones

“But how do they perform?” you may well ask.

Both screens are optimised for gaming, with Full HD 1080p resolutions, anti-glare coatings and 144Hz refresh rates. These characteristics ensure that framerates stay high, accuracy is excellent, distractions are limited and smoothness is unsurpassed. The IPS panel technology guarantees that colour accuracy and clarity are both at their best.

Of course, the components under the hood that are used to drive that display is just as important, and here, AORUS has gone with a unique ‘All Intel Inside’ setup. This is a configuration only found in the AORUS 5 and 7 – with the processor, Wi-Fi and SSD all best-in-class components from Intel. The processor used is a Core i7-9750H – a hyperthreaded six-core 9th-generation beast, that runs at 2.6GHz stock with the capacity to Turbo Boost up to 4.5GHz when needed – all while keeping power consumption as efficient as possible.

The AORUS 5 sports a super-speedy, PCIe M.2 Intel 760p SSD at up-to 4TB of capacity. There’s also a 2.5-inch SATA drive for secondary storage for apps, games and media files that don’t need PCIe’s extreme speeds. Over on the AORUS 7, the extra space in that larger chassis means there’s room for another PCIe M.2 drive, pushing that total fast-storage capacity to 6TB. That means that even with today’s gargantuan games files, you’ll struggle to run out of space – and, more importantly, slow loading times will be relegated to being things of the past.

Networking makes up the Intel trifecta, with Killer Wi-Fi technology powered by Intel’s Wireless AC1550 chip. It operates in conjunction with the built-in Ethernet port, bringing you the Killer DoubleShot Pro wired/wireless combo that prioritises the routing of gaming websites and applications by ensuring that they traverse the fastest routes across the wired and wireless networks. Killer Xtend technology can also simultaneously transform these AORUS laptops into Wi-Fi extenders, able to boost the signal around the rest of your home! The new Killer Control Centre 2.0 also offers a feature called Gamefast whereby unnecessary services are paused and system cache is freed up, so that gaming apps can run more efficiently.

The pièce de résistance to that hardware is the addition of Nvidia graphics. Depending on how much you have to spend and your specific requirements, you can choose from either a GeForce GTX 1650 or 1660 Ti GPU to power your gaming. These affordable-but-powerful chips will ensure that your competitive games smoothly and at high framerates on that aforementioned 1080p/144Hz display – and moreover, they won’t turn your laptop into a power-hungry, heat machine.

Thermal issues are further mitigated thanks to Gigabyte’s Windforce 2X cooling system. This sees almost half of the base of the laptop vented for air intake, plus two powerful 12mm fans and up to four heat pipes actively expelling heat out of two large vents at the sides (and quietly, mind you).

When compared side-by-side with other similarly-specced gaming laptops, the AORUS 5 and 7 also hold up quite well. Taking an AU$1,699 AORUS 5 and an AU$1,799 MSI GL65 as examples, you can see that these two machines share many basic specifications – both include the same Intel Core i7 CPU and Nvidia GeForce GTX 1650 graphics processor. And likewise, they both offer 16GB of speedy DDR4 memory and spacious a 512GB NVMe SSD.

In other key areas, however, the AORUS simply gives you more bang for your buck. Why settle for the GL65’s 120Hz display, for example, when you can instead opt for the AORUS 5 with its premium 144Hz panel – which, moreover, even carries HDR 400 certification?

Similarly, in place of basic networking components, the AORUS 5 includes Killer Networking for both wired and wireless hardware that’s specifically optimised for gaming. And with the latest 802.11ax – aka Wi-Fi 6 – technology, the AORUS 5 is a whole generation ahead of the competition when it comes to Wi-Fi capabilities.

Why pay more for less?

Whether you’re gaming or not, the AORUS 5 and 7 are a joy to type on thanks to their full-sized keyboards, which incorporate both number pads and arrow keys. Those keyboards also backlit, with each zone being able to replicate 16.7 million different colours. The large trackpads support Windows Precision – meaning that in addition to heightened responsiveness, gestures can be conveniently used to enhance workflows.

Being made by Gigabyte also provides additional advantages. On the one hand you’ve got the assurance of Gigabyte’s great build quality, which is backed up with a 2-year warranty. On the other, you can feel good about being part of the United Nations’ Plant-for-the-Planet initiative, which will see Gigabyte plant a tree for every laptop bought and registered – helping offset any carbon emissions.

You’ll struggle to find more well-rounded gaming laptops on the market. Both the AORUS 5 and AORUS 7 address everything that’s important to gamers – and don’t throw in unnecessary extras that just inflate the price. In fact, the only potential source of concern around this pair of winners will be deciding which one suits you better: the big-screen bad boy that is the 17-inch AORUS 7, or the PC-gaming-everywhere 15.6-inch AORUS 5. But hey, gamers love a good challenge, right?

For more information on these amazingly-affordable gaming laptops, simply follow these links:

The AORUS 5 and AORUS 7 are available from the following Australian retailers: