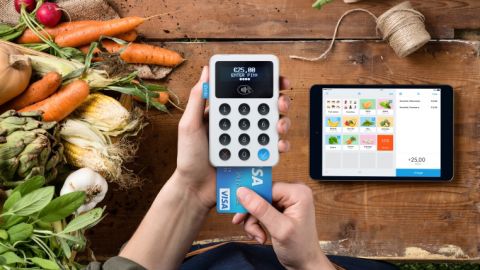 If you’re looking for freedom and flexibility without too many overheads then the latest version of iZettle looks to tick all the boxes and adds in the convenience of accepting multiple cards.

iZettle 2 is a new and improved version of the card reading service that has been around in one form or another for a while now, since 2010 in fact and it's also now owned by PayPal. It’s proved to be very popular and the latest incarnation is likely to boost that appeal. The great thing about it, and perhaps the main reason that it has been a hit with so many people, is that it is one of the simplest solutions out there for taking payments.

The iZettle 2 is a compact card machine that works alongside a very impressive app on your phone to make the processing of payments a doddle.

This edition of iZettle is just as attractive as the earlier model and proves to be very affordable, which means that it continues to be hugely popular with small business owners who want a cheap-ish way to process payments.

Once you’ve bought the card reader for £29 plus VAT you’ll then be charged a fixed rate for each transaction of £1.75, which makes it a sensible option and monthly fee-free alternative to some of its competitors. The app, incidentally, is free.

Meanwhile, the e-commerce card transaction fee is 2.50%. If you pick the basic Go package then you can sign up for free while the more potent Go Plus package is £29 per month plus VAT.

There’s also a Pro package for those with more sophisticated requirements for £39 plus VAT per month for each iPad device you have enabled. Restaurants, bars and cafes are the target market for the latter. Interestingly, if you want to be green then opt for the iZettle Ocean Reader made of recycled materials. It’s £98 plus VAT for both it and the iZettle Reader 2 bundle.

iZettle 2 came out just over a year or so ago and, as many users have pointed out, there didn't seem to be a whole lot to differentiate it from the original incarnation.

Nevertheless, iZettle 2 does continue its theme for being smart, simple to use and highly efficient. The compact card machine that forms the hardware part of the iZettle equation is largely unchanged when you compare it to the original machine, save for a green button where the blue one used to be. No matter, as it works as well as always.

Another prime benefit of iZettle 2 and its associated system is the simplicity of how it works. Because the card reader is mated to the app on your smartphone or tablet, all you really need to stay in a position to process payments is a connection.

This can be achieved using Wi-Fi or 3/4G in tandem with Bluetooth, and all that means you can be processing payments from pretty much anywhere, especially as mobile coverage and Wi-Fi and almost universally available in one form or another.

The card reader, meanwhile, only takes a couple of seconds to power up and can last for 8 hours on one charge. Recharging it can be done via an included USB cable, by or using the iZettle Dock 2.

You’ll find that getting up to speed with iZettle 2 is simple and straightforward, so little wonder it is so popular. And, of course, one of the best things about it is the fact that it can accept all sorts of credit and debit cards.

In fact, it’ll handle just about anything your customer wants to throw at you, including Visa, Mastercard, Visa Electron, Maestro, V Pay, American Express, JCB, Diners Club, UnionPay and Discover too. And, to underline that iZettle 2 is keeping up with the times it’ll process payments from the likes of Apple Pay, Google Pay and Samsung Pay too.

iZettle also offers lots of other physical accessories such as receipt printers and cash drawers should you need them, adding to the seamless experience for taking money.

iZettle 2 continues with the theme of providing support for customers via phone and email and, to be honest, that largely seems to suffice if you need to check something between 9 to 5 on Monday to Friday.

If you’ve got more advanced requirements, however, there is also the step up from their Go package, with a Go Plus edition that now offers you additional support across workdays, from 8am to 8pm. Usefully, weekends are covered too with support from 9 to 6 pm.

You’ll need to pay £29 plus VAT per month for it, but if you’ve got a business that’s going places and can justify it then this route might be worth considering.

We love iZettle 2 and can see why it has become such a hit with small business types who need to work lean, but also require the power and flexibility to accept and process payments from all sources.

You’ll find that the iZettle 2 pays for itself almost immediately and the convenience it delivers is invaluable. We also love the way you’re not locked into an unwieldy contract with iZettle, and its pay-as-you-go philosophy is wonderfully useful. You really only pay for what you use and that, when business might be slow, proves to be a real boon on top of all the other positives.