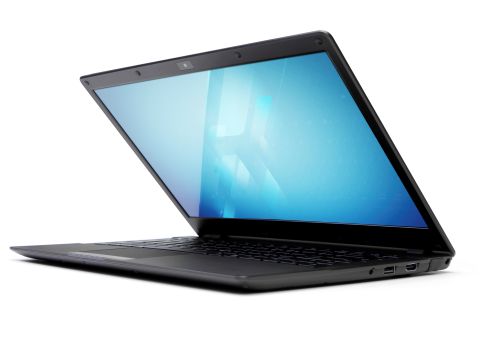 We've recently been inundated with a torrent of Intel Ultrabooks from big-name brands, such as the Toshiba Satellite Z830, Asus Zenbook UX31, HP Envy Spectre and Lenovo IdeaPad U300S.

These ultra-portable and powerful laptops all come equipped with solid-state drive (SSD) storage, long battery life and a chassis that's thin enough to give the Apple MacBook Air a run for its money.

Smaller manufacturers haven't been so quick off the mark, though, which makes the Novatech nFinity 2367 Plus the first Ultrabook we've seen that isn't from an established, global computer company.

That isn't to say Novatech is small. The British firm has been selling both components and customised PCs for a while, and in keeping with tradition, there's plenty of choice with its Ultrabook range, with the option of an Intel Core i3, i5 or i7 processor, and varying quantities of storage and memory.

They're all less expensive than the bigger brands, and there's also the option to buy a model without an operating system, which reduces the cost further.

We're talking significantly less expensive. The Core i3 Novatech nFinity 2367 Plus model that we were sent is priced at just £625, and comes with 4GB of memory, a 128GB SSD and Windows 7.

An Ultrabook free from the shackles of a pre-installed operating system opens up the possibility of installing a distribution of Linux, such as Ubuntu, on the Novatech nFinity 2367 Plus.

You can also try the Windows 8 Consumer Preview, or even Windows XP, if you wish.