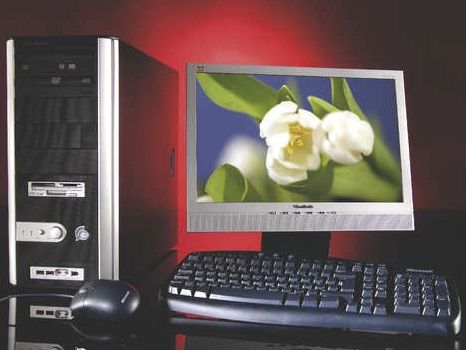 This PC impresses from the moment you take it out of the box, with a base unit that's both stylish and solid enough to survive the occasional knocks. Plug it in and a blue light shines out at the base. This is very impressive with the lights out.

The case is slightly impractical, however. The DVD drive is recessed, for instance, and you have to feel around for the eject button. We're not a great fan of the power and reset buttons on top of the case, because it's all too easy to press the wrong one if you're fumbling around under the desk.

The design gets a thumbs up from us elsewhere, however, and the general specification looks good, too. You get an Athlon64 X2 3200 CPU and a 250GB SATA hard drive. Your video needs are catered for by a 256MB GeForce 7800GTX, making thisa fast (non-SLI) graphics system, and it's all displayed on the excellent ViewSonic VX912 19-inch monitor.

Further benchmarks delivered mixed results. The Octan didn't perform that well in the memory bandwidth rankings, for example, but made good on the CPU score. Factor in the speedy graphics and average hard drive speeds, and the Octan made a solid 5,313 in our overall PCMark 05 test.

The system also proved expandable with eight USB2 ports (two at the front, six at the rear), three FireWire and one LAN port. You're also provided with three free expansion slots (one PCI, two PCI Express), which you can access without a screwdriver thanks to the tool-free case.

Yet, somehow, when you look at the competition, this doesn't seem quite enough. Other systems have faster processors, more RAM and hard drive space, a second optical drive, more bundled hardware and software.

Although the Octan does deliver good performance, the bundle is relatively sparse by comparison to others, and so purely on value for money terms you'll probably prefer to look elsewhere.