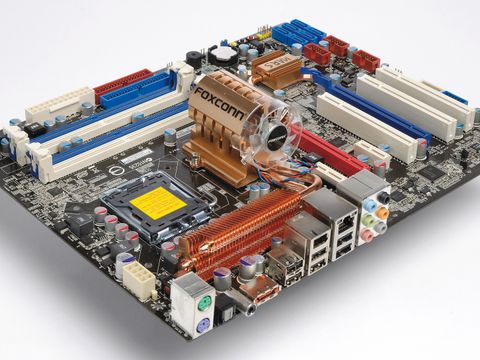 Mars puts F.E.A.R. in the heart of mobos

They mean the god of war, not the chocolate bar, obviously. That'd be silly.

And this is not a silly board at all. It's definitely pitched at the fiddler, with a giant heatsink and fan on the northbridge, and controls for boot, reset and CMOS clearly present as micro-switches on the board itself - very handy indeed.

Overclocking at the touch of a button

Output-wise, it's one of the best equipped boards we've seen, but what we really like is the ACME instant overclock button in the BIOS.

Simply entering '20%' to beef everything up accordingly (except the voltages) seems like some kind of wizardry, or at the very least cheating - and yet it works almost as well as manually tuning it yourself.

Performance in F.E.A.R. leapt to over 220 frames per second with one BIOS switch.

Unless you're desperate for an X38, there's plenty of mileage in one of these instead.