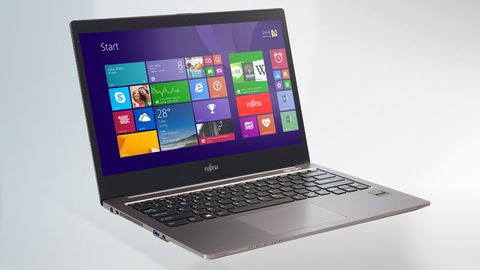 Breathing life into the business Ultrabook

A classy-looking business Ultrabook with an incredible display and practical biometric security options. We're not sold on that keyboard, though.

Fujitsu has taken the wrappings off its new flagship business Ultrabook, the Lifebook U904. It continues the Lifebook range's tradition of combining eye-catching consumer-style design with a raft of business-friendly features, but you might have to take your IT manager out for lunch (and pay for it too) to stand a chance of being offered one as your next work machine.

The base configuration comes in with an RRP of £1363 (around $1549, or AU$1660). From there on you can pick and choose features depending on your budget - from a matte or glossy display (touch or non-touch) to a backlit keyboard and 4G LTE connectivity.

Featuring a 14-inch display with optional 10-point multi-touch, it's a laptop engineered for Windows 8.1 (64-bit or Pro 64-bit), but you can order it with Windows 7 pre-installed if you've yet to be taken in by Windows 8's Charms, (Live Tiles, Start Screen and so on).

It's no huge shock that Fujitsu is offering the Ultrabook with Windows 7 pre-installed. Windows 8 reaches a two-year milestone in October 2014, but the OS and its tile-based interface is still struggling to find favour with many businesses and consumers alike who are clamoring for the traditional desktop experience of old.

That said, it's possible that a turnaround is on the cards. The recent arrival of Windows 8.1 Update 1 means that those who opt for the Lifebook U904 with Windows 8.1 pre-installed will at least have the option of applying the update, which introduces a bunch of features designed to make life easier for keyboard and mouse users.

To find out more about what the upgrade brings, click here.

Fujitsu claims that the Lifebook U904 is the world's thinnest 14-inch business Ultrabook. Measuring 15.5mm thick (x 329.9mm x 229.9mm), it's certainly one of the slimmest on the market. It's the type of Ultrabook that I'd be more comfortable slipping into a protective pouch or carrying bag, but you wouldn't be too concerned when slipping it straight into a backpack either.

Thickness is evenly distributed evenly along the edge, rather than tapered as on Apple's MacBook Air line, which lends it a solid feel wherever you hold it.

The Lifebook U904's case is constructed of a magnesium alloy, and it's tough to boot. The only flex we could detect was on the laptop's underside, which you wouldn't notice unless you was deliberately prodding and bending away at it.

The lid opens at a wide angle - around 160 degrees - which allows for convenient interaction with the touchscreen. It can't quite manage the near-flat, 180-degree angle that the Lenovo ThinkPad X1 Carbon can recline, but it offers plenty of scope for finding a suitable angle while resting the Ultrabook on your lap.

It doesn't quite recline enough to let you share content with, say, somebody leaning over in front of you, particularly as the viewing angles, while good, aren't quite as wide as what you would get from an IPS panel. There's definitely a 'sweet spot' that you get when looking at it head on.

The display is also very reflective due to a lack of anti-glare coating. A version of the U904 is available with a non-reflective, matte coating, but you would have to opt for a non-touchscreen version as a result.