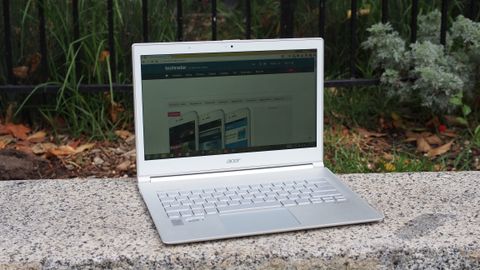 Remove the bloatware and you'll get a powerful notebook in a slim and modern design that will add a lot of visual appeal to your desk.

With an already stunning design from last year, most of the improvements Acer made to this year's Aspire S7 come under the hood. This year's model bears the same luxurious white glass aesthetics from last year, but Acer gave the S7 a speed boost with the latest generation of Intel Core processor and integrated Intel HD graphics.

To give the Aspire S7 its minimalist and refined style, Acer chose to go a different route than most of its competitors. Unlike the metal-clad Dell XPS 13 and Apple MacBook Pro 13-inch with Retina display, the S7's design is reminiscent of Apple's iPhone 4 design, with a metal frame holding a glass sandwich together.

The Aspire S7 takes on a more minimalist, and less gaudy, design than the faux-leather cover on last year's Samsung Ativ Book 9, a decision that Samsung has since abandoned for a more simple metallic finish on this year's iteration.

Fashionable, luxurious and chic are a few adjectives that I would use to describe the Aspire S7's glass design. The white finish and aluminum trim makes the Ultrabook unique in the Ultrabook market, appealing to those who prefer white electronics given that most laptops today come in silver or black, and Apple has since abandoned the color option on the discontinued plastic MacBook.

The glass attracts a fair amount of fingerprint, but thankfully the white color does a good job of concealing fingerprints. It's unclear how well the Gorillas Glass lid can withstand scratches over time compared to metal and plastic notebooks.

Surprisingly, even though last year's model can be configured with a WQHD screen, bringing the resolution to 2,560 x 1,440 pixels, this year's model is capped at 1,920 x 1,080 pixels, making the 2015 Aspire S7 seem like a downgrade for those chasing a Windows version of Apple's 13-inch MacBook Pro with Retina display.

The wide viewing angle and 180-degree hinge makes the Aspire S7 an attractive option for mobile professionals and students. Coupled with the compact frame and light weight of the laptop, the Aspire these screen features make peer-to-peer collaboration easier for projects and small presentations.

While the display of the Aspire S7 is more than bright enough for indoor use, the screen is instantly washed out under a bright sun. Those looking to do most of their productive work indoors shouldn't have any issues with the screen, but the display shows glare and reflections under the sun.

The Aspire S7 uses a barrel hinge design, which is unique for a consumer-class Ultrabook as it allows you to open the screen out to 180 degrees. This hinge allows the screen to lay flat, and for students looking to use the Aspire S7 in classrooms, this allows for better peer-to-peer collaboration. Lacking a 360-degree hinge, the Aspire S7 is not a convertible and can't be used as a tablet like the HP Spectre x360.

There are also LED light indicators on the barrel, which are visible whether the laptop is closed or open, and gives you a quick visual on whether the system is in standby mode and if it's charging. The plastic cover surrounding the hinge on to the Aspire S7's body isn't as secure as I had hoped – apply a bit of pressure to the silver plastic and the hinge cover pops out of place. I am not sure if this is a design flaw or just an anomaly with my review unit.

Opening up the lid, you'll find an aluminum keyboard deck and silver keys. Even though the Aspire S7 comes with full-sized keys arranged in an island-style layout, the keyboard is missing a dedicated row for the function keys. Instead, the function keys live alongside the top number row, and the keys are accessible with the Fn button.

Because of the more compact keyboard arrangement, Acer had to shuffle around some symbol keys. This means that the Caps Lock button has been compressed, the Delete key has been moved from the top to the bottom next to the arrow keys and the tilda key ( ) has found a new home next to the miniaturized Caps Lock.

Despite coming with full-sized keys, Acer made some compromises to fit everything into the Aspire's thin frame. The key caps are flat on the Aspire S7, and key travel is shallow.

Even though the keys don't move in as far as on a MacBook Pro when depressed, there is more key travel compared to Apple's MacBook. Key travel feels about on par as the Microsoft Surface 3 with Microsoft's Touch Cover keyboard case.

The keyboard backlight glows a blue-green hue when you're typing in the dark. The choice of color appears less harsh on my eyes compared to the bright white LED backlighting on competing notebooks when typing in darkened environments, but the color seems to jar with the white aesthetics of the hardware.

A white sheet of matte plastic covers the bottom of the laptop. It's unclear if stains on the undercarriage will be an issue over long-term use as they were on the white plastic MacBook. Bottom firing stereo Dolby-branded speakers are also located at the bottom.

Despites its thinness, the Aspire S7 was able to deliver left- and right-channel sound isolation for stereo sound. There is also rich audio fidelity, and even at higher volumes there is minimal sound distortion.

The side-mounted power button on the left-hand side sandwiched between the USB 3.0 port and power connector is an odd choice. Given the spacious keyboard deck on the Aspire S7, it's curious why Acer didn't place the power button there.