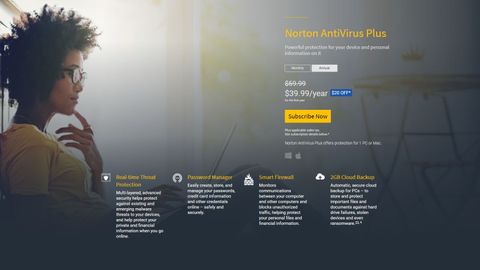 First appearing back in 1991, Norton AntiVirus is one of the most long-lived antivirus software products around. These days there's Norton software for PCs, Macs and mobile devices, covering security, backup, search, optimization and more.

The modern Norton AntiVirus Plus is mostly about the fundamentals. It boasts detection of known threats, intelligent behavior monitoring and an excellent file reputation service to spot new dangers, along with one of the best antiphishing technologies you'll find anywhere.

There are a few worthwhile extras, like Norton Identity Safe password manager, but the package isn't trying to win you over with the length of its feature list.

The price is comparable with Bitdefender and the top competition, at an initial $39.99 for a 1-computer, 1-year license, and $59.99 a year after that. But you can't get a discount by adding more devices or years, unlike competitors such as Bitdefender, where for instance a 3-device, 3-year license costs $110.5, or $12.29 per device year.

That doesn't mean Norton won't give you discounts, you just have to buy a different package to get them. For instance, Norton Security Premium adds a firewall, automated backup, cloud storage, parental controls and customer support, and covers up to 10 PCs, Macs, smartphones or tablets for a very reasonable $52 in year one, $104 on renewal.

Norton AntiVirus Plus doesn't have a trial build, so you'll have to make do with Norton Security Deluxe. It's essentially the same package with a firewall, though, so you'll get a good feel for Norton's core abilities.

Installation is straightforward. The setup program picked up a harmless security product on our system (Bitdefender Agent) and asked us to uninstall it, but also gave the option to leave it installed. We much prefer this approach to stricter uninstallers which demand you remove almost anything from competing vendors. It's good to be warned about potential problems, but users should have the final say over whether to uninstall other software, or not.

The setup process also offered to install a couple of Norton's browser extensions. Norton Safe Web warns you of dangerous websites, and Norton Identity Safe is a straightforward password manager. Both are worth having, unless you have similar protection already, but they're available separately for free and so don't add much value here.

Once the installation was over, we noticed that Norton's various folders and files had gobbled up a vast 1.6GB of disk space, considerably more than most of the competition.

It's still unlikely to fill your hard drive, though, and the program had little other impact on our system resources. We noticed only three new background processes on our test PC (including the host for the Chrome extension), typically consuming under 50MB of RAM, and for the most part you won't even notice it's there.

Norton AntiVirus Plus has a clean and stylish interface, absolutely packed with options and controls. Your protection status is clearly highlighted, including details on your last update and scan. There are buttons for common groups of functions (Security, Identity, and so forth), and clicking these reveals even more actions and settings, many more than you might expect from a standalone antivirus tool.

While this might initially seem intimidating, it's not difficult to use – rather, it's comprehensive. If you need to check your system, click Security > Scans and you can launch quick or full scans right away. Choose Custom Scan and you're able to check specific drives, folders or files.

There isn't quite as much low-level tweaking power as you'll get from vendors such as Avast and Avira, where for example they don't just ask you whether they should scan archives, but allow you to specify the types of archives to check, and the depth of nesting to support (how many archives within archives to open). Norton doesn't go that far, but the average user is unlikely to care, and there are plenty of more accessible options available.

For example, you can define and save a custom scan of your own, perhaps checking D:\Files and E:\More, ignoring some scan types to save time (rootkits, tracking cookies), scheduling this to run automatically, but only when the system is idle and it's on AC power (for instance), and choosing what happens once the scan is complete (turn off the system, sleep, hibernate or leave it on). These aren't the expert-level options you'll sometimes get elsewhere, but they're still very helpful, and it's much more likely that the typical user will understand and be able to use them.

There are valuable extra tools and features available, too. For instance, if a regular scan can't detect or fix your problem, the program also provides the effective Norton Power Eraser, which can often detect more stealthy threats. Or if you're just looking for pointers to possible threats, choosing the Norton Insight option scans running processes to quickly highlight anything which might be dangerous, or at least merits closer examination.

If you prefer a quiet life, you don't have to get involved in any of these complexities. Sensible default settings mean Norton AntiVirus Plus takes care of most issues on its own. On-demand scans can be run from the console or Explorer's right-click menu. These use multiple threads to optimize performance, but also back off when you're using demanding applications to avoid slowing you down. Overall, we found speeds were excellent, our test threats were all detected and there were no false alarms.

Having web protection powered largely by browser extensions makes it a little messier to manage than more integrated packages. Still, Norton's malicious URL blocking record is one of the best in the industry, and well worth installing if you don't have similar URL filtering software already.

Bonus performance features include tools to delete junk files, defrag your hard drive or manage startup programs. These are a little better than some: the Startup Manager doesn't just list your startup programs, it shows their resource impact, how many other Norton users have them, plus it allows delaying their launch as well as turning them on or off. But tools like CCleaner still give you far more PC maintenance functionality for free.

AV-Comparatives' Real-World Protection Test is a comprehensive benchmark which pits 18 of the top antivirus engines against some of the very latest malware.

The February-June 2018 summary report covers the results of five monthly tests, and Norton achieved a reasonable 7th place with a protection rate of 99.5%. The product outperformed Avast (99.4%) and was only fractionally behind Kaspersky (99.7%), with its only real problem being a large number of false positives (32 – the third highest in the group.)

AV-Test's July/August 2018 Windows Home User report showed even more positive results, with Norton hitting a 100% protection rate for both zero-day and common malware in both July and August's tests. The package also scored 6/6 for performance and 5.5/6 for usability, making it one of several to earn AV-Test's 'Top Product' award.

These lab reports are far more comprehensive than anything we could do in a short-term review, but we also wanted to run an additional test of our own.

We've written our own custom ransomware-like program which spiders through a test folder tree, opening and encrypting common images, videos and document types. As we've created the threat, Norton won't have seen it before, making this a good test of its ability to detect and block ransomware by behavior alone.

The results were unusual. We ran the test executable, and it died almost immediately. A few files were encrypted, but Norton AntiVirus Plus didn't recover them or even warn us of a problem.

We ran the program again, and the same thing happened – the process encrypted a few files, disappeared, with still no warning displayed. We ran the test program a third time, it was killed again, and finally, at last, an alert told us Norton had detected and removed a threat.

There's some good news here, in that Norton AntiVirus Plus clearly can detect and block ransomware-like software going by its behavior alone. But it's worrying that this may partly happen without warning the user, and the time taken to detect and remove a threat means you could lose a lot of data.

Our test threat managed to destroy 454 files before Norton could stop it – Kaspersky not only stopped the program before it could encrypt even 20 files, it managed to recover the originals, ensuring we didn't lose anything at all.

We rounded off our tests with a look at Norton's impact on system speeds, which revealed very positive results. PassMark Software's 2018 Consumer Security Products Performance benchmarks found Norton had less impact on systems than anything else, placing it first out of a field of 15 (that's even better than the lightweight Windows Defender). There can be no 100% guarantees, but Norton seems far less likely to slow down your PC than most of the competition.

Accurate, lightweight, fast and flexible, there's a lot to like about Norton AntiVirus Plus. Unfortunately, rivals like Bitdefender and Kaspersky offer more features and licensing options, as well as better performance with ransomware and file recovery.