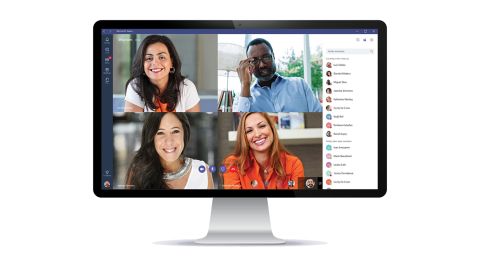 Despite missing some of the features found in competing products on the market, such as digital whiteboarding and device agnosticism, Microsoft Teams is a cost-efficient excuse for any company that hasn’t already adopted Word, Excel and OneNote to do now do so immediately.

It’s apparent now more than ever that the days of working in a dedicated office space are behind us, and now we can look forward into a future where remote employment is the main kind of employment.

No longer do we have to worry about getting in our cars or hopping on the subway in the wee hours of the morning just to get to work on time. Finally, there’s time to eat breakfast at our laptops, in the comfort of our own homes, as we wait to call in to our weekly meetings. As isolating as it might seem to some, telecommuting saves companies money and saves you the hassle of buying new pants: pajamas are all that you’ll ever need.

Well, pajamas and a way to communicate with your colleagues that is. Amid all of the other workplace group chat options, like Slack and HipChat, are a batch of alternatives called video conferencing software that don’t totally neglect non-spoken forms of communication. After all, according to Frost & Sullivan, non-verbal cues make up 90 percent of all human communication.

Though it might appear we’ve addressed the barriers of communicating online with the advent of the emoji, ideas and tone can still be misconstrued and taken out of context when they’re conveyed over text. That’s why it’s critical that we find viable and effective ways to communicate for the large portion of mobile employees that are working from home, from coworking spaces or otherwise.

If you ask Microsoft, the solution is Teams, a service that combines the capabilities of predominantly text-based services – like Slack – with video and audio conferencing services more along the lines of RingCentral Meetings and Zoom. The end result is a feature-complete way to conduct online meetings that almost invalidates the need for Microsoft’s other virtual collaboration service, Skype for Business.

Still, by purchasing a subscription Microsoft Teams, you’re awarded automatic access to Microsoft Teams which is, like, a win-win if you ask us. Speaking of which, let’s take a look at what else you get with Microsoft Teams as well as how much you can expect to shell out for its multitude of features.

Microsoft Teams isn’t like other video conferencing services we’ve reviewed. Instead of charging for its services alone, Redmond has decided to fold Teams into Office 365 for Business whether or not you care about its suite of productivity apps, which includes everything from Word and Excel to the Outlook email client and the commonplace PowerPoint presentation software. That said, it’s a bit confusing how Microsoft is trying to sell Teams.

Either way, you get the same version of Microsoft Teams. There aren’t pricing tiers with varying features like you see with RingCentral Meetings and Zoom, or even Cisco WebEx for that matter. Rather, Microsoft Teams is a one-size-fits-all service whose price depends solely on what other Microsoft programs your business requires.

Whereas the cheaper Office 365 Business Essentials only comes with Exchange, OneDrive, SharePoint and Microsoft Teams, Office 365 Business Premium contains a slew of other applications, namely Outlook, Word, Excel, PowerPoint, OneNote and Access if you’re using a PC. There’s also a free version of Teams, although Microsoft itself admits that this is more of a preview than a full-fledged product.

With Microsoft Teams free, you can anticipate unlimited messages and search, guest access and integration with Word, Excel, PowerPoint and OneNote (however, assuming you’ve paid for those already, it’s not clear why you wouldn’t have access to a paid version of Microsoft Teams as well). Every edition of Microsoft Teams, including the free version, supports up to a whopping 300 users.

Moreover, there are 140 other apps and services that integrate with the free version of Microsoft Teams. You even get one-on-one and group calling, channel meetings and screen sharing. At the same time, you are limited in terms of cloud storage to 2GB per user and 10GB shared among your staff.

If you like Microsoft Teams free and decide you want more from it, well, there’s an easy solution: pay $5 (£3.92) a month for Office 365 Business Essentials, which ups your file storage to 1TB per user and adds on scheduled meetings and meeting recording. You also get access to web versions of the Word, Excel, PowerPoint, OneNote and Outlook apps in addition to Exchange email hosting and a custom email domain.

The $12.50 (£9.80) Business Premium version of Microsoft Teams is the same, except in addition to web versions of the aforementioned Office 365 apps, you get web and desktop versions of Word, Excel, PowerPoint, OneNote and Outlook.

Distinguishing itself from competing services like RingCentral, Zoom and WebEx, Microsoft Teams has all the basics of a competent and collaborative video conferencing service without much of the fluff. Unlike Zoom and RingCentral Meetings, there’s no mention of reporting functionality, admin controls, virtual whiteboarding, annotations or the ability to join meetings from other devices such as mobile and PBX phone systems. What Microsoft Teams does have is an unbeatable low range of prices and a family of Office 365 programs included, so long as you opt for anything other than the free version.