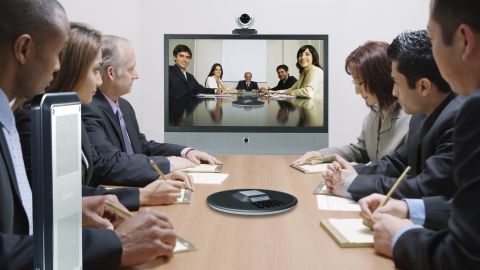 Lifesize isn’t as focused on delivering the highest number of features for the lowest cost as many of its competitors are. Rather, this video conferencing software is uniquely intertwined with camera-mounted video conferencing hardware that arrives as part of your monthly subscription rate. Geared toward organizations in every industry, Lifesize has top-notch video and audio quality, tight security and even a free trial so you can test it out before buying.

For quite some time now, video conferencing software has been the de facto method for businesses administrators to communicate with their employees remotely. No longer is it necessary to pay for entire flights across the country – or, in some cases, the world – in order to meet in person. Today everything from quarterly financial meetings to job interviews can be conducted virtually through the cameras on our computers and mobile devices.

But what if there was a solution that tightly integrated its video conferencing software with equally compelling hardware? An award-winning app that’s designed for ease of use, due in part to its same-brand compatible hardware, Lifesize aims to be your go-to video conferencing software whether you’re working in media, education, healthcare or manufacturing. It’s a rather versatile application with decent pricing to match.

Unlike some of the other video conferencing software out there, like Cisco WebEx and LogMeIn's join.me, Lifesize is not bound to your web browser and can instead be found on a wide variety of platforms. You can download and install Lifesize on Windows 7 or newer, Mac OS X 10.10 or newer, Android 7 or later and iOS 10 or later. In terms of video and audio quality, you can expect full-fledged 1080p video at up to 60 frames per second (fps) and wideband HD audio with built-in echo cancellation, potentially giving the Dolby Voice-equipped BlueJeans a run for its money.

Even though you don’t have to lock yourself to a browser, however, you do have the option to use Lifesize in Google Chrome, Internet Explorer 11 and Microsoft Edge. The Chrome support in particular is enhanced with a full-featured web app. And if you’re concerned about the security of Lifesize, you’ll be happy to find out that the software has 128-bit AES encryption, automatic firewall traversal and web proxy support. That’s not as good as Zoom’s Secure Socket Layer (SSL) and 256-bit AES encryption, but suffice to say, it comes close.

Advertised as “Secure for IT, easy for everyone,” it’s clear that Lifesize is targeting a wide range of clientele in varying industries. Despite being a little pricier than some of its competitors, it’s not by much, and Lifesize doesn’t skimp on collaboration features like some of its less meatless rivals. It’s the rare example of software that strikes a healthy balance between accessibility and functionality, with at least some consideration of value thrown in to account for its more frugal base of prospective customers. Speaking of which, let’s look at the prices.

As enticing as Lifesize sounds on paper, no company wants to invest in video conferencing software that goes over the determined budget. A clear departure from what we’ve seen with RingCentral Meetings and Zoom, there is no permanently free version of Lifesize. Instead, this software takes the less popular route of join.me and opts for a 14-day free trial of its software that doesn’t require you to enter any credit card information to start with. So far, so good.

What’s not as exciting is that Lifesize’s most affordable plan costs more than that of RingCentral Meetings and Zoom. Whereas RingCentral Meetings Essentials and Zoom Pro cost $14.99 (£11.79) a month, Lifesize’s cheapest subscription package – the aptly named Mini Bundle – costs $16 (£12.27) per user per month, based on a non-optional annual commitment.

The Lifesize Mini Bundle supports 25 total users, one permanent meeting room and global customer support. Contrarily, both RingCentral Meetings Essentials and Zoom Pro support 100 users in a meeting at the same time. What sets Lifesize apart, however, is the inclusion of hardware. The Lifesize Mini Bundle, specifically, comes with an Icon 400, which the company describes as a “small conference room solution” with an integrated camera.

Next up, the Lifesize Small Bundle costs $19 (£14.55) per user per month, and purchasing it nets you two Icon 450 cameras with smart-framing sensors, two Lifesize Phone HD systems, two wireless sharing devices, up to 125 total users, 10 permanent meeting rooms, 125 simultaneous users, unlimited audio conferencing, single sign-on, Skype for Business interoperability and up to 50 meeting participants. Though the meeting participant number is still low, the amount of hardware you get for this price is unparalleled.

Although the pricing tiers that Lifesize offers are more expensive than comparable subscription plans from the likes of RingCentral and Zoom, Lifesize more than makes up for the negligible difference in cost by incorporating its own hardware into its plans. For $19.99 (£15.31) per user per month, you not only get most of the features you would find in competing services, but you also get 15 devices to stick in your conference rooms without the need to rely on the cameras integrated into your personal computers and smartphones.