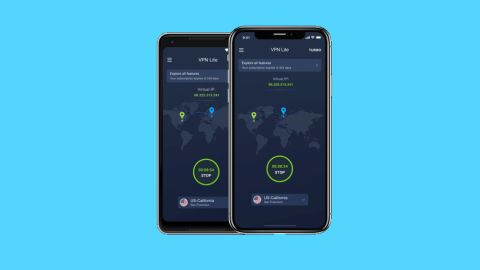 VPN Lite is a must-see if you're after a simple, unlimited and free service, but it's too underpowered for all but the most basic use.

KeepSolid VPN Lite is an interesting new VPN service from KeepSolid, the power behind VPN Unlimited.

VPN Lite has some very appealing features. You can use it for free; there's no need to sign up or hand over personal information, you still get 24/7 support, and even the free plan doesn't have any bandwidth limits, or even ads.

Unsurprisingly, there are catches, too. The free plan gives you access to just one location, in California. You can only use the service on mobile devices. Protocol support is limited to IKEv2, and encryption is 128-bit only.

VPN Lite's free option has its issues, then, but it should still be adequate for simple tasks. The lack of a location list ensures the app is supremely easy to use, too, as there's little more to it than a Connect button. Tap to enable the service and protect your web traffic; tap again to turn it off. That's it.

That may look cheap, but keep in mind this is a per-device cost. Private Internet Access' monthly plan costs $6.95 (£5.35) (and the annual plan is less than half that), but that covers up to five devices for a single user, which can include desktops as well as mobiles.

Still, if you're mostly interested in the free plan, the prices probably won't worry you very much. And in any event, you can try the full service for 7 days before you're billed.

KeepSolid VPN Lite is very clear about its attitude to logging: it doesn't keep any, says the company, pointing to its 'Zero-log policy.' Check the small print, though, and it seems that might not be entirely true.

There's nothing very surprising here. The company isn't talking about recording your browsing history, or logging or even examining the content of your web traffic. This is more about basic session logging than anything else, and many VPN providers do something similar.

VPN Lite could keep some quite in-depth session logs, though (it's not clear from the policy exactly what the service collects and what it doesn't.) There could be enough here to tie a session to a particular device, and potentially a very accurate location via an IP address and wifi network name.

This probably isn't going to significantly affect the privacy of most users, especially if they're using the free plan and haven't even handed over their email address. Still, it's more of an audit trail than we would like, especially in a VPN which claims to have a 'zero-log policy' on its front page.

VPN Lite's Android app installed without hassles, and opened by offering us three options: to use the free version, take the free trial, or immediately sign up for the Turbo plan.

We opted for the free trial, which is really just the usual Google Play subscription process; you agree to subscribe, but aren't billed for the first seven days of use, and can cancel whenever you like.

The app opens with a world map, and a couple of pins indicating your current location and the selected server. Tapping a blue Connect icon connects you to VPN Lite, and displays your new IP address; tapping the button again closes the connection, and that's almost it.

The app's location list is just a little more interesting. You're able to choose from multiple locations within some countries (Canada, Germany, India, UK, US), and tapping a Favorite icon for a particular location will move it to the top of the list.

After this location-picking excitement, though, the Settings dialog gets back to VPN Lite's ultra-minimalist basics. This is sparse even by the standards of a simple consumer VPN, as the only option you get is the ability to switch to Night Mode, a dark theme. (The website claimed the full app supported both IVEv2 and the KeepSolid Wise protocol, but we saw no way to switch protocols.)

There's not a whole lot of functionality in VPN Lite's real-world use, either. In particular, there's no indication outside of the app interface to tell you when the service connects or disconnects. That's important, so we'd prefer a notification of some kind (some smarter apps can vibrate your device to let you know.)

Switching locations is easy and natural, though, with no need to close the current connection before you choose a new one, and overall VPN Lite is simple and easy to use.

We began our performance tests by checking out the free plan's California location. Our speed hopes weren't high, but VPN Lite managed a respectable 25-30Mbps, not bad at all when connecting from the UK.

Our local UK server averaged a capable 40Mbps when connecting via wifi (the same setup averaged 50Mbps when the VPN was disconnected.)

Switching to Europe made little difference. Every location gave us over 20Mbps, making for speedy browsing and hassle-free streaming.

We had some problems with long distance connections, but these were generally down to getting connected in the first place. Several times we were left waiting for a very long time, watching the animated 'Connecting' button, while absolutely nothing happened at all. But most of the time, that wasn't an issue, and when we did connect, speeds were very acceptable (18-22Mbps for Australia, 20-25Mbps for Singapore.)

The VPN Lite website suggests that it can 'open doors to any content' by 'making your traffic look like it’s coming from the server’s location.' There's no specific commitment to unblock Netflix or any other specific service, but it's clear what the company is trying to say.

Our tests suggested these aren't just words, either. VPN Lite lived up to its promises immediately, giving us instant access to BBC iPlayer from its UK server.

This doesn't work with VPN Lite's free plan, of course, as you only get one California location. But that's enough to access some websites, and for example we were able to stream US-only YouTube content without difficulty.

What VPN Lite couldn't do for us, in either its free or commercial forms, was unblock Netflix. Whatever we did, Netflix detected our VPN and displayed its usual warning.

Top VPNs usually have a whole web library of guides and tutorials on setting up, using and troubleshooting their services. Meanwhile, all we could find on the VPN Lite website was a 'Browse FAQ' button which didn't link to anything. Admittedly, this is such a simple VPN that it doesn't need much documentation, but we still expected a little more.

KeepSolid makes up with 24/7 support from its own teams, though, via chat, ticket and email. We sent an email and found response times varied a lot - 18 minutes in one case, closer to 18 hours in another - but they were always acceptable, and the replies we got were helpful and quickly pointed us in the right direction.

If you can live with the single US location, KeepSolid VPN Lite is a smart free choice, unlimited bandwidth, decent speeds and easy to use. There are no features, though (it's called Lite for a reason), and the full Turbo plan is expensive if you're protecting multiple devices.