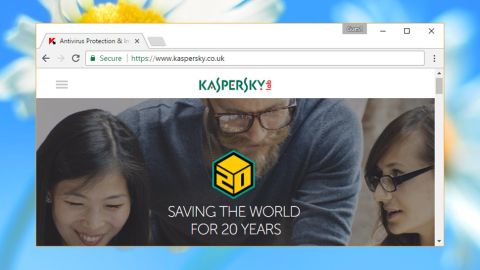 Simple, straightforward and accurate malware blocking, but with a few issues on some systems.

Note – this article is now obsolete, as we have a new review of the most recent version of this product here: Kaspersky Anti-Virus 2019.  Should you wish to see how the older version stacks up comparatively, however, read on...

Eugene Kaspersky started developing antivirus software as a hobby in 1989. In 1997 he co-founded Kaspersky Labs with his wife, and over the years it has grown into a cybersecurity giant with 400 million users and 270,000 corporate clients.

Kaspersky's starter product is Kaspersky Anti-Virus 2017, a simple package which concentrates on the key essentials only. Forget Bitdefender-type extras like a password manager, banking protection or file shredder – Kaspersky leaves those for its high-end tools. The Anti-Virus product focuses solely on keeping you malware-free.

This isn't necessarily a bad thing. Going back to basics can make for a more lightweight tool, with a simplified interface ensuring it's easier to use. If you don't need a password manager, you won't miss it, and if it's a must-have, there are plenty of very capable freeware products around.

Kaspersky Anti-Virus 2017 is available in a 30-day trial build. It arrives as a tiny downloader and there's no need to register, hand over your email address or provide any other details.

This wasn't a fatal error, fortunately, as unlike Bitdefender and some other competitors, the installer doesn't force you to remove whatever ‘incompatible’ software it finds. This saved our test, as we were able to rerun setup and tell it to ignore this phantom incarnation of 360 Antivirus. It's also riskier for novice users – should you keep something which really is incompatible, you could run into real problems later on – but on balance we prefer the flexibility.

Once we'd skipped the incompatible software step, the setup process ran without any issues at all. It has no tricky installation options, just agree to the terms of service and the installer downloads the main package, sets it up and launches it in a couple of minutes.

Kaspersky's console has a well-designed, simple and straightforward interface which even total beginners will be at home with right away. There are only four main buttons, each with large icons, and text captions if you're still unsure (‘Scan’ – ‘Scans your computer and external devices’).

Clicking any of these buttons takes you to another panel with further information. Click Database Update, for instance, and there's a couple of sentences explaining the purpose of updates, telling you when the last update was run, and offering a button to update now. It's a well-presented system which minimises screen clutter and makes it easy for anyone to find and understand individual functions.

Scanning is a great example. You can be running a full scan in a couple of clicks, but there's also a quick scan, selective scan (drag-and-drop the files and folders to check) and external device scan, and you even get a very simple scheduler to run regular automated checks.

We found scanning times were a little above average – 90 seconds for a Quick Scan, 80 minutes for a Full Scan of our very large test system – but acceptable. Overall we'd describe Kaspersky as thorough rather than slow, as its scans often turned up items that other engines missed; even high-end competitors like Bitdefender.

URL filtering seemed inconsistent. Running a search for a test site highlighted it as dangerous in the search results in Firefox, but not Chrome. And yet, Firefox allowed us access to the page, while Chrome blocked it. Internet Explorer and Microsoft Edge didn't display any search highlighting, or block the link. It seems a little messy, although at least our security wasn't compromised, as the engine blocked malware downloads from every browser.

Some very basic bonus features start with a Vulnerability Scan which warns about issues with applications and Windows. This was a disaster on our test system, locking it up during every test. On rebooting, a partial report highlighted some useful information – whether autorun was enabled, unusual Internet Explorer settings – but didn't help us analyse them. It told us "some websites have been added to the Internet Explorer list of pop-up blocker exceptions", for instance, but there was no integrated way to view those websites.

Separate Browser Configuration and Windows Troubleshooting tools sounded promising, but they only appeared to check the Internet Explorer settings covered by the Vulnerability Scan.

A Privacy Cleaner scans your computer for browser and operating system histories. It does a basic job, but has limitations (Firefox isn't covered), and the best-of-breed freeware is far more powerful.

We were marginally more excited about the Kaspersky Rescue Disk link, but even that was a mild disappointment: there's no integrated disc builder, just a link to download a bootable rescue environment from Kaspersky's site.

Put it all together and Kaspersky Anti-Virus 2017 appears strong on its core malware-blocking abilities, but we experienced some odd technical glitches, and the package is distinctly short on useful extras.

While we run some limited malware detection tests during reviews, the big independent testing labs do a whole lot more, and that's why we combine the results of multiple reports to assess a product's effectiveness.

AV Comparatives produces monthly real-world protection tests which measure the accuracy and reliability of all the main antivirus engines. Kaspersky regularly appears at or near the top of the list, and although one or two top names may do better (Bitdefender, for instance), the differences are marginal.

AV-Test doesn't give us quite as many reports, but its April 2017 ‘best antivirus software for Windows Home User’ report found Kaspersky protected against 100% of the test threats, also rating it highly for performance and usability. The company was one of five to get the organisation’s top award – the others were Avira, Bitdefender, Norton and Trend Micro.

SE Labs – a new testing player from the ex-technical director of Dennis Technology – has produced an interesting report on home anti-malware protection. Kaspersky and Norton topped the list with 100% protection in everything, outperforming products from Bitdefender, ESET, Trend Micro, AVG and Avast.

It's important that antivirus software doesn't slow down your PC significantly, and some companies run separate performance checks for this. Our experience is that Kaspersky's lightweight approach doesn't greatly affect a system, and PassMark's Consumer Security Products 2017 report suggests the same thing. Although note that PassMark was assessing the performance of Kaspersky Internet Security, this product rated a solid 4th out of 14, with only Norton, ESET and McAfee doing better.

We're not sure about the value of every aspect of PassMark's test, and assessing this kind of slowdown effect is difficult anyway, but AV-Comparatives' last Performance Test [PDF] gave broadly similar results. The report scored Kaspersky as 7th out of 19, but showed it had minimal effect on speeds, and was much better than most products.

Kaspersky Anti-Virus 2017 caused some technical glitches during our tests, and they're a concern. These won't necessarily crop up on every system, though, and what you can be sure you'll get is excellent protection, user-friendly features, and a lightweight design that won't slow you down. If you're looking for a new antivirus package, Kaspersky must be on your shortlist.

Kaspersky Anti-Virus 2017 is lightweight, easy-to-use and offers solid protection. We experienced a few technical issues with the product, but these won't affect everyone, and overall it's well worth taking the trial for a spin.