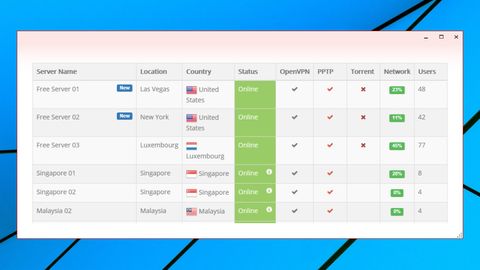 FinchVPN isn't for newbies, but old hands happy to set up the service on third-party apps will get decent performance for a very fair price.

FinchVPN is a simple VPN with a distinct lack of features. Doesn't sound too appealing, right? But its low prices and free plan might, just possibly, persuade you to give it a try.

The company network is tiny at just 13 locations, but these cover a wider area that you might expect. As well as North America, the UK and Europe, there are servers in Australia, India, Japan, Malaysia, Russia and Singapore. Torrents are supported on some of these.

The FinchVPN website gives an unusual level of detail on server use. While some VPN providers might give you a 'server load' figure, if you're lucky, FinchVPN shows network usage, the number of current users, bandwidth used today, and even a graph showing usage over the past couple of months.

FinchVPN doesn't exactly offer leading-edge technology in other areas. While other providers are now talking about improving speed and security by implementing the new WireGuard protocol, the FinchVPN website is still promoting the ancient PPTP, so insecure that many competitors have dropped it entirely. (Fortunately, you can opt to use the much more capable L2TP/IPsec or OpenVPN.)

You're unlikely to be impressed by FinchVPN's apps. There are only two, a basic Windows offering and an Android app which hasn't been updated in the last ten months. You can still use the service on Mac, iOS and Linux, but only by setting it up manually (there are tutorials on the support site.)

FinchVPN's main plus point is its free plan. This gives you just three locations (two in the US, one in Luxembourg) and in a uniquely annoying touch, changes your password regularly. But it also gives you 3GB of data per month, much more than you'll see with many competing free plans (Avira's Phantom VPN gives you 500MB a month, Panda's VPN just 150MB.)

FinchVPN's Premier plan includes unlimited traffic and adds support for port forwarding, but remains good value at just $1 for 7 days and $3.86 billed monthly, falling to only $3.21 on the annual plan.

There is one catch: the real price varies depending on your payment method. The 7-day Premier Plan only costs $1 if you pay via PerfectMoney; use Google Play or CoinPayments (for cryptocurrencies) and the price jumps to $1.25, opt for PayPal and it's $1.35 (there's no stand-alone card payment option).

While this is annoying, FinchVPN's 7-day plan is still very cheap, and if you only need coverage for a quick trip, it might be a smart choice.

FinchVPN's privacy policy is brief, but to the point, explaining that the company does not 'store details of, or monitor, the websites you connect to when using our VPN service.'

There is some session logging, though, as FinchVPN records your connection time, bandwidth used and disconnect time whenever you use the service.

There's no mention of whether the company records incoming or destination IP addresses. If it does, that could be enough to link an IP address associated with an internet action, back to your account. A FAQ page tries to respond to this, but it's not the clearest of answers: 'Our system designed to not tied any specific user details/activities on any specific FinchVPN servers.' Well, okay.

While browsing the small print, we noticed that FinchVPN has a 'strict no-refund policy.' That's not unreasonable for a service with a free plan, but it's still worth keeping in mind. Sign up for 7 days and test FinchVPN carefully before you even think about paying for an annual plan.

We signed up for FinchVPN, downloaded the Windows client, launched in, and... Were surprised to see there was no installer. The download turned out to be a self-extracting archive which unzipped itself into our folder of choice.

Although this is simple, it can lead to problems. There's no shortcut added to the Start menu, for instance. And OpenVPN connections might not work unless you set up the TAP driver from the client Settings page (this only takes a couple of clicks, but you must know where to look.) Still, experienced users should have everything up and running within a couple of minutes.

The client interface isn't as polished and novice-friendly as most of the competition. Out go world maps and colorful flags, in comes text-heavy screens with plenty of technical jargon.

The VPN still works in much the same way as any other - choose a server and click Connect - but the presentation is poor. The location list is a plain text menu, with no data on server load or ping times to help you choose. The connection port is displayed on the main screen, which will probably leave beginners wondering what the default '443' actually means. And when you do click Connect, the client tries to keep you informed by displaying technical OpenVPN status information, like this:

We suspect that most users would prefer a simple 'Connected' message.

There are some interesting advanced features here. FinchVPN offers various protocols to bypass VPN blocking (SOCKS VPN, Anti DPI, SSH VPN), along with support for port forwarding, HTTP and SOCKS5 proxies, and the ability to add your own OpenVPN configuration settings.

Unfortunately, poor presentation makes these more awkward to use than they need to be, and FinchVPN falls down on more basic features. The client doesn't have a kill switch, for instance, and perhaps because it doesn't use a Windows service, it won't necessarily recognize when the connection has dropped. (When we forcibly closed the OpenVPN process, the client continued to display its status as Connected, even though we were unprotected and giving away our real IP).

FinchVPN's client had its issues, but once we were online, performance was mixed but usable. The free Luxembourg server managed 16-18Mbps, for instance. But US server #1 reached 34-36Mbps, and server #2 hit 60-65Mbs.

Upgrading to a paid account got us access to all thirteen of FinchVPN's servers, and again, these gave us a wide range of results.

Our nearest UK server reached 65-68Mbps on our 75Mbps test line; Netherlands servers were a more average 30-40Mbps, while one connected but didn't allow us to access any sites; Japan gave us 18-20Mbps, while Australia was a little disappointing, though still just about usable, at 10-12Mbps.

The FinchVPN website mentions iPlayer, so we hoped its Premium UK server would get us in. But no luck, unfortunately - iPlayer detected that we were using a VPN and displayed its regular 'content is not available in your location' message.

FinchVPN desperately needs more locations, and more and better apps. But the 3GB/ month free plan is generous, the 7-day plans are cheap, and speeds are better than we expected. We wouldn't use it for anything serious, but FinchVPN could work as a simple backup VPN.