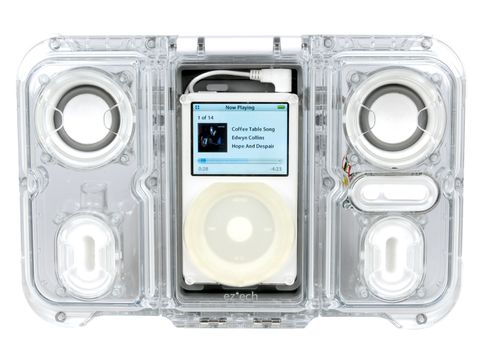 The Ez'ech proves an unlikely candidate for iPod use despite its transparent look, cheap price and fairly disastrous overall appearance

This rubber dock makes a splash, but sound quality lands it in hot water

Singing out of tune or getting the words wrong can ruin the morning ablutions, but until now the bathroom hasn't been the place for serious audio equipment.

It still isn't, despite Ez'ech's new waterproof iPod speaker being able to withstand being plunged a full metre underwater. Our baths aren't quite that deep, but the Ez'ech proves an unlikely candidate for iPod use despite its transparent look, cheap price and fairly disastrous overall appearance.

The doors are open

A door that opens like a castle's drawbridge achieves its waterproofed status, and there's also something medieval about its reliance on just a 3.5mm stereo cable instead of an iPod-specific attachment.

The stereo jack pokes through the clear, polycarbonate surround and operating on batteries only, the Ez'ech shuts down after a few minutes if, say, a playlist has reached its end, saving power.

As we expected, the sound quality that's served up here doesn't match the more serious attempts around, but the Ez'ech makes a decent effort, considering its size and build quality.

A play of Scott Walker's The Old Man's Back Again reveals a poor frequency range that makes music sound pretty flat, but there is just enough bass to make even Scott sound acceptable for a shower.

Ultimately built for novelty value rather than as a serious iPod dock, the Ez'ech makes a limited splash.