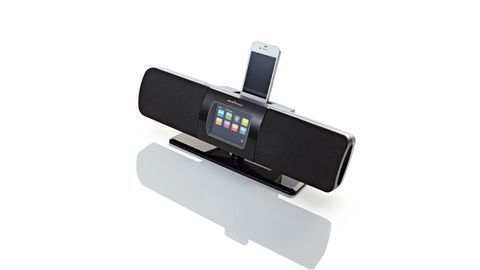 The Magicbox Beam has its plus points, but outright sound quality isn't one of them

On paper the Beam iPod/iPhone speaker dock from Magicbox sounds like an absolute steal.

Priced at just £180 it boasts a DAB, DAB+ and FM radio tuner, built-in Wi-Fi and Ethernet port for streaming over 11,000 internet radio stations and/or tunes from your iTunes library; plus a touchscreen user interface that makes it a breeze to use.

The catch comes from Magicbox Products' outlandish claim that the Beam is aimed at 'serious music aficionados' - a claim that we're about to disagree with.

It all starts off so well. The key feature list above is an obvious attraction for anyone on a tight budget - and the Magicbox Beam certainly looks the part, thanks to a soundbar-style design with a colour 3.5mm touchscreen display.

The touchscreen gives you iOS-style user icons that give quick access to the Magicbox Beam's various features and you should have no problems setting up and using the speaker dock despite the presence of a setup wizard and the unit's refusal to lock onto any FM stations worth listening to - most of the time we ended up with static.

You can even use the Magicbox Beam to stream content from your Mac's iTunes library even though it lacks AirPlay. So far, so good.

The Magicbox Beam's biggest flaw lies in its sound quality and build. Although it feels solid enough, everything about it feels cheap and plasticky - and that's reflected in its sound quality, which at best manages to be both boomy and rather tinny and is better suited to simply recorded tunes playing at relatively low volumes, rather than more complicated stuff cranked louder.

True, you can get more tuneful bass out of it by tweaking its EQ settings, but even then 'serious music aficionados' are likely to feel cheated.