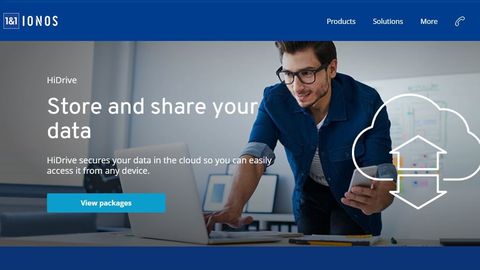 A fast and elegant solution that just needs some extra layers of security adding to make it a genuinely viable alternative to the bigger players in the cloud storage arena.

Recently, 1&1 has merged with the German enterprise cloud specialist, ProfitBricks, to form 1&1 IONOS, and it is this company that has developed the version of HiDrive that we’re reviewing here.

In a crowded SaaS market, what has HiDrive to offer that makes it a good alternative to Dropbox and the other big cloud players?

Most SaaS solutions offer either synchronization or ad hoc file storage, but HiDrive is one of the few that does both in a single package.

Desktop clients (PC and Mac) can sync their folders to the cloud, and they can also place files that aren’t stored on the computer into that same space. Mobile devices are also supported, with automatic securing of photos on both iOS and Android.

A nice extra twist is that you can also hook up this product to devices that support FTP, rSync, SCP and Git, like NAS boxes.

What the service doesn’t offer is any means to secure an entire computer enabling it to be fully restored in the event of a storage or hardware failure. Instead, it’s meant as a point-and-secure mechanism where you highlight the folders you need to keep safe, and the software then dispatches them to HiDrive cloud storage.

You can redefine the tree hierarchy, enabling you to secure the majority of folders that you commonly use, and you can also tag arbitrary ‘device’ folders to accommodate those apps that refuse to store things logically.

The only limitation of this is that the main HiDrive defined folder is a live backup, whereas the ad hoc ‘device’ backups are either manual or daily. We also noticed that only folders that are physical drives and not network attached storage can be secured.

What also might confuse some users is that the client application bolts the service into the computer at two entirely different points by default.

A virtual drive letter is used to create a top-level drive pointing to the HiDrive storage, and almost the same files are also available through the C:\users\username\IONOS HiDrive folder structure, except for the Public folder level.

The danger is that users think they’re different for whatever reason and delete things from one assuming the files will remain in the other location.

A single user account is allowed 10 devices, split between Android, iOS and Windows computers, allowing you to use the service to sync the contents of multiple machines.

One noteworthy aspect is that the root of the HiDrive drive contains public folders and the user subsystem, making cooperative file and folder use much easier to organize.

A notable limitation is that in the current release of HiDrive there isn’t any versioning, so should someone foolishly overwrite an important file there isn’t any way for them to retrieve it from the live backup.

However, the device backup mode does divide each backup in a way that allows files from a specific day to be recovered. Unfortunately, you are forced to recover everything from that day to get one file, as there is no way to navigate the backup before restoration.

Overall, the latest client tool is a massive improvement over the older HiDrive client app, even if it has the odd tendency to revert to German and ask you to ‘Starten’ a process on occasion. And all dates are displayed in American format (MM/DD/YYYY) irrespective of the PC’s region settings.

Also note that links in the app often take you to German support pages, where English speaking Chrome users can have the amusement of seeing what Google Translate makes of them.

We’ve already covered much of the desktop client, but the web interface has a whole slew of functionality that you can’t get from the desktop software alone.

Whereas the desktop app focuses on the machine it’s installed on, the web interface not only provides global access to the files copied online, but also allows them to be shared remotely with others who don’t use HiDrive.

Shares can be password locked, write access denied and time-limited. There isn’t a means to limit the number of downloads, but the system logs the number of accesses.

As an administrator, you can also use this portal to access the folders of team members and make changes to the public area.

Probably the biggest weakness of the web interface is that it doesn’t link to any online office tools. Other than image file formats, the web interface has no plan for what to do with different document types other than to allow you to download them locally.

Most cloud storage operations rely on SSL protected transfers and AES encryption on the servers to keep the contents safe from nefarious folks who might wish to access it.

This is the same security HiDrive offers. And, for most users, it is enough to keep their files safe. Although for very sensitive data there aren’t any greater levels of security, like two-factor authentication or private encryption keys.

According to the company, these options are being developed but aren’t available at this time.

In short, if you want end-to-end encryption, zero-knowledge passwords or even two-factor authentication, then look elsewhere until those features are added.

Before we talk about pricing, it is worth knowing that 1&1 is a large operation, and various versions of HiDrive are being sold and circulated through its subsidiary, Strato, who are the developers for the HiDrive solution.

The version we tested came from www.ionos.com and not www.strato-hosting.co.uk or www.free-hidrive.com. The free version found at that last link, for example, is completely different from the one reviewed here – in almost every aspect.

This multiplicity is a very confusing aspect of HiDrive, and some customers might get a better deal than others depending on how they find the service initially.

However, if you want the ‘device backup’ functionality we talked about earlier, that requires the top level ‘Pro’ tier which costs you $20 (£15.60) per month, but enables 10 users to work with 2TB of cloud storage. All these prices are with an annual contract, but you can pay a little more and have a monthly contract if this better fits your business needs.

To make it a relatively risk-free exercise, 1&1 IONOS offers a 30-day period where you can cancel and get a full refund if you are not completely happy with the service.

Those prices aren’t the most competitive, especially compared with Microsoft and Google, but they’re reasonable when the primary focus here is business users and small teams.

What you get for the investment is a fast and reliable platform that is reasonably easy to install and configure.

It needs some security enhancements, versioning support, and integration with Office 365 and Google Docs, but 1&1 IONOS HiDrive is a solid option for those businesses looking for something they can rapidly deploy which doesn’t require much user training.