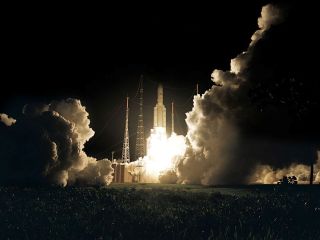 The Ministry of Defence has announced that its Skynet satellite system is to be expanded to include a £400 million fourth spacecraft.

The expansion is touted as Britain's biggest space project and is set to launch in 2013.

It is designed to help monitor and control unmanned aircraft, like the miltary's new Reaper drones. That's right. Something called Skynet is being built to help control robot killing machines.

Albeit in Stevenage and Portsmouth rather than at the heart of the US industrial-military complex.

"The decision to go for a new satellite is an absolute vindication of the approach that made Skynet 5 a service contract," explained Paradigm's chairman Malcolm Peto, who is in charge of the satellite service, to the BBC.

"It gives the MoD an assurance that the extra bandwidth will be there to meet their needs, and it gives us the ability to sell more capacity to third parties."

The current Skynet system, which sorts out secure transmissions for the UK military, has so far cost £3.6bn.