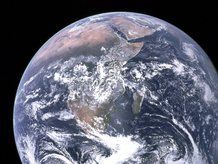 A female astronaut lost one of the largest items ever on a spacewalk recently, after she accidentally let go of her toolkit.

The astronaut had been performing a spacewalk at the time, in order to fix a faulty solar panel.

While working on the panel, Heidemarie Stefanyshyn-Piper let go of her tool bag, as a grease gun that was inside exploded.

With space being, well, space, the bag floated leaving Stefanyshyn-Piper helpless to anything, except mutter, "Oh, great."

Eventually the solar panel was fixed, but it took a further six hours as she had to share tools with another astronaut.

Speaking about the gaff, Stefanyshyn-Piper explained: "Despite my little hiccup, or major hiccup, I think we did a good job out there."

A further three spacewalks are planned. Because of this, Mission Control is assessing the impact the space junk will have on the walks. And they're maybe having second thoughts about Stefanyshyn-Piper's accident-prone DIY skills.