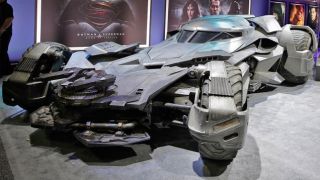 You may have reservations about Ben Affleck pulling off Bruce Wayne, or Jared Leto's drug-addled Joker look. But can we all agree that the new Batmobile from Batman v. Superman is awesome?

Zack Snyder, writer and director of the film, has teased the new Batmobile several times, from tweets to shadowy images in trailers. But at the boringly-named 2015 Licensing Expo in Las Vegas, Nev., fans got their first real look at the newest incarnation of the most famous vehicle in the comic world.

The new Batmobile looks like the best of Tim Burton and Christopher Nolan's iterations, armed to the teeth, like the Dark Knight trilogy's Tumbler, while staying sleek and trim, like the comics. We'll probably have to wait until the film hits theaters in 2016 to see if it can jump across rooftops.

As a big fan of Nolan's Dark Knight trilogy, I am happy to see that the Batmobile didn't revert back to the goofy Adam West days (though that holds a special place in my heart). The gritty realism of Batman sets he and his films apart from every other brightly-colored, spandex-clad hero, and it's good to see his newest vehicle fits the character.