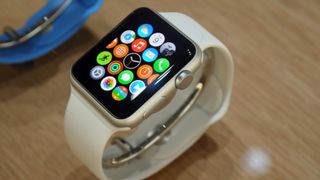 Tim Cook is teasing more and more details of the Apple Watch as its April release date nears.

Apple's CEO recently visited one of the company's flagship stores on the Kurfürstendamm in Berlin and spoke a little about the release of the Apple Watch.

According to reports from the event, Cook said he is always wearing his Apple Watch, "even in the shower", suggesting the first wearable from the company will be waterproof, as reported by iGen.

It also isn't clear just yet whether it'll be all versions of the Apple Watch or if some straps will not be advised for use in the shower.

Cook also reiterated the fact he removes the Apple Watch every night to recharge it, but we already know that it will need charging every day.