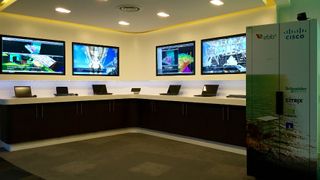 Think you need a powerful workstation to do your heavyweight graphics work? In actual fact, all you need is an internet connection – providing you have ebb3's High Performance Virtual Computer (HPVC) on the other end of it.

Of course, virtualisation is nothing new, but as British startup ebb3 notes, its freshly launched HPVC is powerful enough to drive heavyweight apps for the likes of CAD or CGI work, delivering 3D graphics to 4K displays with no worries about lag or stuttering.

The cloud platform allows creative professionals to collaborate wherever they happen to be in the world, and using any device. Andy Bowker, executive founder of ebb3, commented: "With the HPVC, product designers can show prospective clients 3D wireframe models on an iPad instead of a printout, or collaborate on a project while one partner is in London and one is at a conference overseas, without lag or performance issues. This is a game changer for the industry."

The HPVC doesn't just offer convenient access to plentiful power, as ebb3 is also pushing the cost benefits as well. According to the company, using their system will save an average of 40% in maintenance costs compared to running traditional physical workstations.

And of course the other obvious boon is that only one person can work on one workstation computer, whereas the HPVC grants access to up to 50 users simultaneously (from any location, of course).

The HPVC is backed by a number of big-name partner firms including NEC, Cisco, Nvidia, NetApp, APC, Microsoft and Citrix.