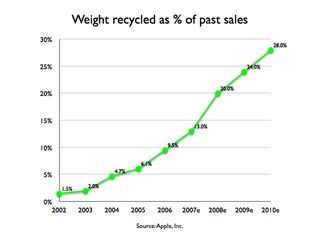 As Apple gears up for the Apple iPhone launch tonight, the company has been praised by Greenpeace for improvements to its environmental policies.

Greenpeace urged Apple to become greener earlier this year, following previous attacks on the company's green performance. The environmental group said today it is satisfied with Apple's recycling programme and its decision to phase out PVC and other hazardous chemicals from its products by 2008.

Nokia is top of the fourth edition of Greenpeace's Guide to Greener Electronics report, but Apple is no longer bottom of the list as it was back in April. It's now in tenth place, ahead of Sony, LG, Panasonic and HP. Nokia, Dell and Lenovotop the list.

"Steve Jobs' latest commitment to eliminate toxic materials, moved Apple up the chart and it now faces a challenge, with the Apple iPhone, to meet customer expectations to be the environmental leader Apple-lovers want," said Iza Kruszewska, Greenpeace's toxics campaigner.

Kruszewska added that the race between companies to be the most environmentally friendly is a step in the right direction.

The Greenpeace ranking is based on the use of toxic chemicals, initiatives to phase out such materials and recycling policies for high-tech consumer goods.