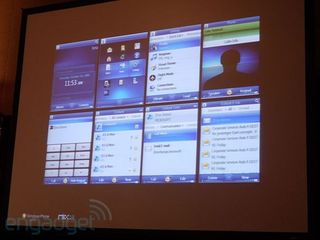 Microsoft used the MIX2010 event to show off what Windows Phone 7 Series could have looked like - confirming previous reports.

The rumours about Windows Mobile 7 have been around for donkey's years, but a new slide from Microsoft (snapped by Engadget) has shown that at least some of them were true.

The original plan was to basically update and re-jig the same Windows Mobile core as used in all releases - which was buggy and not very user friendly at all.

All out of love

This would have meant the usual touch sensitive lower softkeys, hard to tap icons - basically all the things people haven't exactly fallen in love with over the years on the Windows Mobile series.

But thankfully Ballmer stepped in and ordered a complete re-boot of the system, in an attempt to make it more consumer friendly - which is what we've been treated to with Windows Phone 7 Series.

While some critics have argued that the new 're-boot' is a little too consumer-centric, eschewing the business-oriented skew of previous WinMo iterations, at least what's appeared isn't like the slide - Microsoft's mobile aspirations would have probably quietly gone down the toilet.