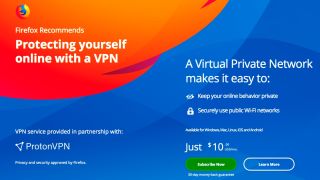 Mozilla has begun prompting a sample of Firefox users to register for a premium VPN subscription when they connect to an unsecured wireless network.

A handful of users in the US running the latest version of the desktop browser will see a popup suggesting they register for the service, which is provided by Swiss company ProtonVPN and costs $10 (about £8, AU$14) per month.

"Using a VPN service means placing a great deal of trust in its provider because you depend upon both the safety of its technology and its commitment to protecting your privacy," said Chris More, head of Firefox growth, in a blog post.

"There are many VPN vendors out there, but not all of them are created equal. We knew that we could only offer our users a VPN product if it met or exceeded our most rigorous standards. We also knew that the practices, policies, and character of these vendors would be just as important in our decision."

There's no obligation to sign up though, and users can tick a box to prevent the prompt appearing again in future.

Mozilla is quite open about the fact that this isn't just about protecting users online - it's also a way to pay the bills, and it will be splitting the membership payments with ProtonVPN.

It isn't Mozilla's first monetization experiment, either. The company began testing with sponsored stories (ie ads), which appear when a user opens a new tab alongside personalized recommendations from read-it-later service Pocket.

These ads are targeted based on your interests, but none of your browsing data is sent to Mozilla or any third parties. Instead, the targeting happens within your web browser. As with the VPN prompts, users can turn sponsored stories off with a click.