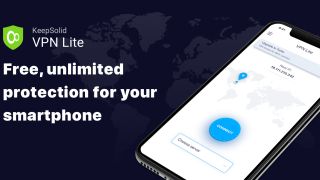 In an effort to make it even easier for people to protect themselves online, KeepSolid VPN is launching a new free mobile app that allows users to connect to a VPN without even registering.

KeepSolid VPN Lite is now available on Android and iOS and the new app allows users to connect to a VPN with just one click. This not only saves time but also simplifies the process of connecting to a VPN without the need for users to mess with settings or pick their desired server on a map.

VPN Lite protects users privacy and anonymity with military-grade 128 and 256-bit encryption as well as a strict zero-log policy.

Unlike other free VPNs that limit user traffic, KeepSolid is providing users of the new app with unlimited traffic and unlimited connection speeds.

The basic version of VPN Lite is available now with a Turbo version coming soon.

The main differences between the two versions of the app come down to the amount of servers available and the level of encryption used to protect the data sent from your smartphone.

KeepSolid VPN Lite Basic only has one VPN server available and your data is protected with 128-bit encryption as opposed to 256-bit.

VPN Lite Turbo on the other hand, will allow users to choose between 400 different servers and it will also protect their data with 256-bit encryption. The Turbo version of the app also utilises the company's own KeepSolid Wise protocol to further protect users.

Both the Basic and Turbo versions of VPN Lite contain no ads and offer 24/7 customer support for any problems you might encounter when setting up your VPN.