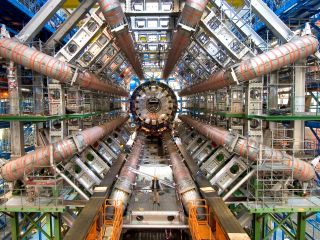 LHC coming to the web

The Large Hadron Collider is set to become the next internet star, after it was announced that its particle-smashing endeavours are to be broadcast on the web.

The LHC is to begin colliding its particle beams 30 March, with footage of the experiment to be shown on the CERN website, courtesy of Groovy Gecko.

The event will also be available to watch on your mobile phone, with Yospace handling streaming duties.

Both companies will be taking their feeds from a satellite downlink provided by SatStream.

Speaking about the event, Craig Moehl, CEO, Groovy Gecko, said: "These experiments are vital for physicists to gain wider understanding of our world, but in this manner, we can bring them to the man on the street as well."

In all there will be four experiments - ATLAS, CMS, Alice and LHCb – all of which hope to find the Higgs Boson, crack antimatter or prove that dark matter isn't just something scientists have made up to keep themselves in a job.

To view the stream log on to http://webcast.cern.ch/lhcfirstphysics on 30 March, from 9.30am.