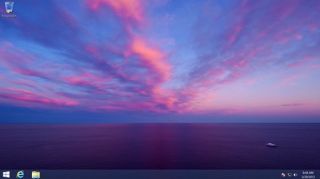 Windows 8.1 will add new features and bring back old ones at the same time

Update: A Microsoft spokesperson provided us with some more information about how fingerprint reading technology will be implemented in Windows 8.1, or "Modern Access Controls," as the company put it:

"Rich first class support for fingerprint-based biometrics has been added [in Windows 8.1]," the spokesperson said. "Your fingerprint based identity will provide enhanced identity security while at the same time offering the very best possible user experience for authenticating to devices, resources, and even making purchases with the Windows Store. Multi-factor authentication using Virtual Smart Cards (VSC) will be made even easier with rich support for provisioning VSC's to BYOD and unmanaged device scenarios."

That's still a bit confusing to the average consumer, but at least Microsoft is clearly gung-ho about the technology.

Microsoft has recently spilled plenty of Windows 8.1 beans, but one thing it failed to mention was fingerprint reader support.

That doesn't mean Windows 8.1 won't allow fingerprint scanning as a security measure, though, and a new report today suggested that it in fact will.

According to The Verge, Windows 8.1 will up Microsoft's native support for biometrics and fingerprint recognition technology.

It will even include the option to lock folders to individual fingerprints. Nifty, eh?

Users will be able to associate their unique fingerprints with their Windows 8.1 Microsoft Accounts, the publication reported.

That fingerprint will then allow them to log into or purchase apps, lock folders, and more.

It sounds like fingerprint reading will be possible both with external hardware peripherals and as a feature built-in to some Windows 8.1 devices.

In fact, Microsoft's Senior Product Marketing Manager Michael Niehaus said during the company's Tech-Ed talks this week that the company is working with hardware manufacturers to have it included.

The company is also reportedly working on getting more OEMs to build the technology directly into their own tablets, laptops, mice and keyboards.

We've asked a Microsoft spokesperson to clarify exactly how fingerprint recognition technology will be implemented in Windows 8.1, and we'll update this post if we receive more information.

It's been rumored for months that Apple is about to get big into fingerprint reading, but this is the most we've heard about it talked about for Microsoft's newest OS.

The company plans to unleash Windows 8.1 on the public June 26 as part of Build 2013. We hope to play around with this fingerprint tech, plus figure out just what the heck is up with the Start tip.