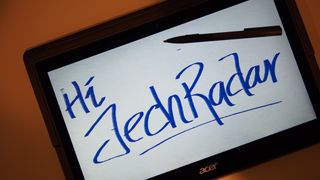 Acer "welcomes" a takeover from a larger company, company founder Stan Shih told reporters. However, Shih was cautious about the prospect of a takeover, noting that any potential buyer would get an empty shell of a company.

"U.S. and European management teams usually are concerned about money, their CEOs only work for money. But Taiwanese are more concerned about a sense of mission and emotional factors," Shih told Taiwanese media, and Reuters confirmed his statements with Acer representatives.

Acer is estimated to have sold 4.56 million PCs in the second quarter, enough to earn it 6.7% of the PC market. The world's fifth largest PC-maker saw its share of the PC market decline from 7.6% a year before. Acer trails larger rivals Dell, HP and Lenovo in PC volume.

Shih's comments come during a period when Acer's stocks have dropped sharply. Over the past period year, Acer's stock went from a high of $25.50 to a low of $9.71. The company's stock is at $11.75 per share at the time of press, giving Acer a market capitalization of $34.75 billion.

In the first half of 2015, Acer posted a loss of T$2.89 billion ($90 million), whereas the company generated a small profit during the same period a year ago. Revenue fell about 18% during this period.

The declining PC market contributed to losses in 2011, 2012 and 2013 despite innovative designs like the Aspire R13, Aspire R7 and Aspire Switch 10. The company, however, has found success in the Chromebook market.

PC manufacturers have found it difficult to compete in the post-PC era with tablets led by Apple's iPad. However, in recent quarters, even the tablet market is in decline. Microsoft and its partners hope that this latest shift may help two-in-one convertibles take off. Unlike an iPad, two-in-one Windows-powered devices can replace a laptop when they're docked to a keyboard case, like the Surface Pro 3 with the Type Cover.

Acer's closest competitors in terms of market share include Asus and Apple. Stiff competition in the market has led to Sony exiting the market and selling its VAIO business.

An acquisition by rival Asus could help the joint companies compete better against the top three tier one PC manufacturers. Neither Acer nor Asus returned our request for comment.

It's unclear if HP, Dell or Lenovo would be interested in acquiring Acer. Dell took its company private in October 2013 to avoid having to report to investors, and HP is in the process of splitting off its PC business from its enterprise arm.