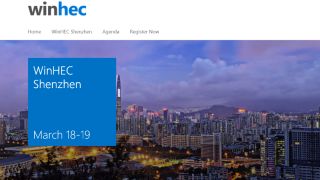 Windows 10 PCs are going to run the usual gamut from the familiar – tablets, notebooks, 2-in-1s, desktop PCs and mini PCs you can mount behind a screen – to the unusual, like HoloLens and Internet of Things devices.

We got an advance glimpse of the hardware that's going to be built thanks to the agenda for WinHEC, the Windows Hardware Engineering Community. And it looks like lots of the new technologies we saw previewed at CES this year will make it into devices.

Some of the most interesting new features supported pertain to connectivity – plugging in devices, docking a tablet when you need more ports and a bigger screen, or sending content to a big screen.

Microsoft is promising "Miracast improvements in Windows 10" as part of the move to WDDM 2.0. You've needed WDDM 1.3 graphics drivers for Miracast in Windows 8.1, along with a Wi-Fi card that can set up the Wi-Fi Direct network between your PC and the screen you're sending to, plus a GPU that has Hybrid Graphics – both a low-power integrated graphics processor and a dedicated GPU that can drive the second screen.

Miracast is useful when you want to project your whole PC screen to another display without plugging in a cable, whether that's to watch a movie, or give a presentation or product demonstration, but it's been tricky to set up. The improvements may simplify that – we've been able to get Miracast adapters like the Roku 3 working on devices running the Windows 10 preview when we couldn't stream with the same hardware and Windows 8.1.

But Microsoft will also be talking about what sounds like a more generic version of Wi-Fi video streaming for Windows 10 – what it calls "Wi-Fi casting and hang detection with recovery".

Unlike AirPlay and Chromecast, Miracast doesn't use your main Wi-Fi network, it creates a separate Wi-Fi Direct network between the PC and the Miracast screen. Perhaps Wi-Fi casting will add an option to stream over a standard Wi-Fi network (today you can do that with Play To, but only from specific applications and only with specific video formats, not for everything on your screen).

Windows 10 gets support for the new reversible, either-way-up USB type-C ports and connectors that we've been expecting, so we should see those showing up on new phones, tablets and notebooks.

We saw motherboards with both USB 3.0 and type-C at CES 2015, and now that phones will run Windows 10, you'll be able to plug USB peripherals in to them as well as plugging your phone into your PC.

That's why Windows 10 will add support for USB Dual Role, where the same device can be either a host that other USB devices connect to, or a USB device that connects to another host – or it can be both at the same time. That also lets you plug a screen into your PC over USB.

USB type-C ports also carry more power than USB 2.0 and 3.0 – Windows 10 will support the full 100W power that USB type-C can handle, so you'll be able to charge your notebook over USB. That's ideal for docking stations; instead of a custom docking connector, a tablet or notebook can just plug in with USB and you'll get power and display connections.

That works because Windows 10 supports another new USB feature, Alternate Modes. Instead of using the usual USB protocol to transfer information over a USB connection, devices will be able to use different protocols like DisplayPort, Thunderbolt or MHL. So with the right cable, a tablet that only has a USB port could drive a monitor that needs a DisplayPort connection. That makes it much easier to design a nice, lightweight tablet that you can use like a full PC when you get to the office.

Microsoft is suggesting to OEMs that Miracast and USB type-C will be great for docking tablets and notebooks, and Windows 10 will also support the new 60GHz WiGig technology. That's a faster wireless connection than Wi-Fi – we've seen speeds between 7 and 12Gbps – but it goes over a much shorter distance. You could use it to send video from your phone or PC to a TV with a WiGig adapter in the HDMI port.

But where it gets really interesting is when you replace the USB or custom port you use to plug a keyboard into a tablet with a WiGig connection. Now you don't need a port that lets dust and water in, or special holes and guides to get the keyboard in exactly the right place to connect to the port. You can just put the keyboard next to the tablet and it will start working without all the fiddly bits of plugging it in.

Doing away with a port will make the dock and the device slightly cheaper and more reliable (often, it's the port that breaks rather than anything else in a dock). Supporting all these options should mean we see Windows 10 PCs with interesting connection and docking options.

It appears that Microsoft is also emphasising the importance of improving performance and battery life, with new tools like a Battery Estimation Engine that shows which apps, services and hardware on the PC are using power, and a new Battery Saver mode. It sounds like PC makers will have to make some changes to their drivers to make those work well.

Windows 8 introduced Connected Standby mode, which lets PCs using low-power System on Chip CPUs like ARM, Atom and the latest Haswell Core processors (including Surface Pro 3) drop into a low power mode where the CPU and memory aren't using power, but Wi-Fi is still connected so email can arrive and a Skype call can wake the device up if you've allowed that.

Windows 10 also adds a new Modern Standby mode. We don't have any more details about this – perhaps it will work with a wider range of hardware than Connected Standby, or allow Bluetooth Low Energy devices to work with a PC in Modern Standby so you could wake it from an external keyboard or find it when it's turned off? Or it might be a version of Connected Standby for the way phones work.