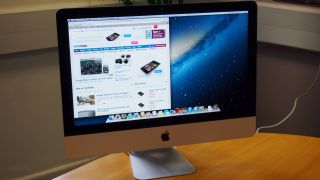 Give us that sweet, sweet Retina

Apple might be about to drop some Retina iMacs, according to some code spotted in the preview version of OS X Yosemite.

The file, spotted by a member of Fench forum MacBidouille, makes explicit reference to some display resolution settings that correlate with a 27-inch Retina iMac.

Rumours of a Retina iMac have been bumbling on for a while, but now we know that Yosemite will scale to create Retina resolutions, it feels like this could really be the year.

Cramming such a large number of pixels into a 27-inch display would be no easy task, which is probably why Apple's Retina iMac has been so long coming. There's also been talk of a cheaper iMac, which Apple could roll out at the same time. Stay frosty.