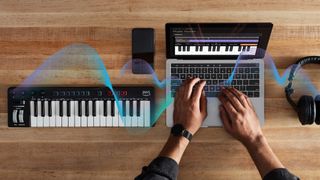 Amazon DeepComposer is a compact 32-key music keyboard (as opposed to a QWERTY one you type on) that plugs into your PC, which is coupled with powerful machine learning technology.

The idea is you play a melody or some chords on the keyboard, which the AI analyzes and then improvises its own composition around. So it’s rather like working with an AI partner to make a pleasant-sounding tune.

That said, the current results in this initial (preview) incarnation of DeepComposer aren’t all that impressive, as Fast Company observed when given a chance to play with the keyboard. They’re definitely interesting, but the tunes composed won’t be winning any music prizes, that’s for sure.

However, that isn’t the point at this stage. Rather, Amazon is aiming DeepComposer at developers, and teaching them more about machine learning processes, as opposed to music composition.

The aim is to educate about machine learning in a fun way, making things more accessible and interesting, as Amazon has done in previous years at re:Invent with the likes of AWS DeepLens – a deep learning-enabled camera – and DeepRacer, a model race car driven (literally) by reinforcement learning.

Specifically, it employs a ‘generational adversarial neural network’ (GANN) which consists of two primary components, the ‘generator’ and ‘discriminator’. The generator composes the actual notes and melody, whereas the discriminator analyzes and guides the process, feeding back to the generator in order to create music which better fits the particular genre being worked in.

Of course, the system feeds off a ton of training data (existing tunes in the various genres) which is broken down, processed, and analyzed for common patterns and so forth.

While this might be aimed at developers currently, there is certainly nothing to stop any tech enthusiast musician from signing up for a keyboard to play around with.

And while at the moment the resulting compositions may be nothing like the required quality to be accepted as serious pieces of music, this does hint at a future where an AI could be a co-composer for hit songs, once the machine learning technology involved is suitably refined.

Amazon DeepComposer will be a service which is charged based on your usage, at an hourly rate, with no upfront fees save the outlay for the music keyboard itself, which will run to $99 (around £75, AU$145) in the US (it’s only available here to begin with, but expansion to other regions is planned).

Amazon says that initially, the DeepComposer console will be accessible from the US East (North Virginia) region in the AWS console.