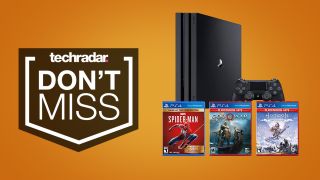 Update: it's sold out. See our PS4 Pro deals page for more bargains.

Original story: Right now, Amazon has a PS4 Pro and three amazing games - Spider-Man, Horizon Zero Dawn Complete Edition and God of War - for just $299.99 as part of its Cyber Monday deals. You know how Amazon's lightning deals work: they're only available for a limited time, so if you want this offer, take advantage before it's either sold out or the deal has ended. At the time of writing, it's 95% sold, so you'll want to move fast to get it.

Not in the US? Read on for the best PS4 Pro deals where you are...

This is a 1TB-equipped, 4K-ready console, and it's the best version of the PS4 you can buy. These three games, meanwhile, take tens of hours to finish each, and they're all exclusive to the PS4. If you've never played any of them, Spider-Man is the place to start: it captures the character better than any other game in history, and it's a real treat.

PS4 Pro with Spider-Man, Horizon Zero Dawn: Complete Edition and God of War: $299.99 at Amazon
Three great games and the better version of Sony's PS4 console. This is a steal, considering $299 is one of the better prices we've seen for the PS4 Pro across the Cyber Monday/Black Friday period. And these three games are fantastic.  View Deal

This is likely to be one of the last great PS4 deals over Cyber Monday. You've got a year to wait until the PS5 gets here: this upgraded PS4 might be the way to go if you're in the mood for a new system, or you just bought a new 4K TV and want something to show off on it.

These are the best PS4 Pro deals for people not in the US: